Let’s talk Geek for a few minutes. I’ll try and keep it entertaining for those that just sighed heavily.

In another life I’m an industrialist from the future. Let’s say about 26,000 years in the future. I don’t have time to catch you up on the details, but basically humans live in a galaxy called New Eden… There are 4 races of humans who are always declaring holy wars, positioning politically, and at each others throats… All in the name of the mighty dollar… So what am I saying? That not much has changed.

Anyway long story short: Like I said, I’m an industrialist that means I take raw materials and manufacture things for sale. I’m new here, which is to say I graduated from the prestigious Caldari Naval Academy about a year ago.  You see, long ago the ability to clone ourselves made us immortal. You ever see Battlestar Galactica? We’re kind of like the Cylons, when we die our consciousness is downloaded into a clone, and we keep on trucking. 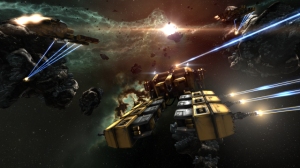 This is handy in combat. And let me tell you, the galaxy is a rough place for a miner. When I got out of the Academy I got myself a small cruiser with a big cargo hold and I slapped a couple of mining lasers on it. I sat in that thing for hours nervously watching my back, waiting for someone to fly up and mess with me. Pirates are everywhere, and they’re not the singing and dancing kind. They’re the blow your ship to hell and scoop up whatever salvage they can find kind of pirates. The worst of the worst simply because in New Eden, everyone is immortal… Why not be a ruthless bloodthirsty warrior? There’s a profit in it.

After the cruiser I moved up to an industrial ship, then eventually a mining barge, until finally I trained long enough to learn how to fly an exhumer. Now I sit and grind away, clearing asteroid belt after asteroid belt of their precious resources. Then I learned I could take those raw materials and instead of selling them, I could get a blueprint and build something. So built I did. I build guns, ammo, equipment, everything under the sun. Then I found shipbuilding.

For the last six months I’ve been building the biggest ships in the universe, the capitals. I started with a small project and I’m slowly working my way up. These things sell for billions of dollars, and while I might spend a few hundred million on minerals, I’m still pulling in a profit.

Now I’ve crossed the Rubicon. I’m halfway through the build on a ship called a Rorqual… and I’m in over my head. You see, this ship is no ordinary one. It’s a capital industrial. It has the ability to use a special fuel to jump from one place in to another without the use of jump gates. Plus it can store other ships and clones inside its massive hull. It can take a small mining fleet, jump out to dangerous low-security space (where all the good mining is) and deploy a space station, a mining fleet, and a huge force field.

From there the fleet of exhumers goes and mines, brings the ore back to the Rorqual, which compresses it and stores it in a special hangar. Rinse, repeat. Then the Rorqual can jump back to high-sec, drop off the ores, and jump back. When the system is clear, everyone loads back into the Rorq, and jumps back home.

This is called Jump Mining… and it is a complicated, lengthy, and extremely profitable thing to accomplish. The only problem is you can’t do it alone… and dealing with other people in New Eden is a total pain in the ass. They’re egotistical, they’re aggressive, they never listen, and they flake out. This is the way of the world.

So the question becomes: do I keep it? or do I sell it? This is the chance to start my very own mining corp, to lead missions to dangerous places in search of the mighty dollar. I’d have to recruit, train, hire protection, I’m talking serious work for a guy who only likes to engage on the shallowest level possible.