The Fall and the Flight of Man

“Are they the lucky ones? That’s what you’re thinking, isn’t it? We’re a long way from home. We’ve jumped way beyond the Red Line, into uncharted space. Limited supplies, limited fuel. No allies, and now, no hope? Maybe it would have been better for us to have

died quickly, back on the Colonies with our families, instead of dying out here slowly, in the dark emptiness of space. Where shall we go?” – Commander William Adama, eulogy for the dead.

Doctor Gaius Baltar was born and raised on a dairy farm outside of the town of Cuffle’s Breath Wash on the farming planet of Aerilon. At the age of 10 he trained himself to speak without the accent of the locals… believing it to be unpleasant and crude. On his 18th birthday, he left, and tuned his back on his family and heritage. Years later, after settling on Caprica, Dr. Baltar became a compulsive social-climber after winning three major prizes for his work in the field of computer tech designer. Gaius (pronounced Guy-us) was also

a self-obsessed nihilist, who’s own lust and greed made him vulnerable to manipulation. His Command Navigation Program, which the Ministry of Defense had appointed him to build, also had a “backdoor” planted by his blonde girlfriend who worked on the project with him, unbeknownst to officials. She was a spy… sent by the cylons to infiltrate the humans’ defenses and allow for a devastating attack.

After 40 years of silence, 40 years of peace, 40 years of prosperity… then (the cylons believing that it was their god-given fate to destroy their “evil” masters), genocide… The cylons attacked the 12 colonies with a fury like none other, as if dealt from the gods’ themselves. They exploited

the backdoor in the colonial defense systems and caught the humans totally by surprise…. allowing not only for the total destruction of the colony’s defenses… but near annihilation of the human race. Using nuclear weapons launched from space, the cylons decimated the 12 worlds, going so far as to render Caprica completely uninhabitable 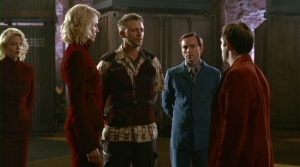 due to radioactive fallout. What had once been a race of sentient machines designed by humans had evolved into models that look human through the help of the mysterious “Final Five.” They had infiltrated almost every aspect of the colonial military and government, and humans had no idea until it was too late. Only a handful of survivors made if off Caprica before the end, Dr Gaius Baltar being one of them.

In space, some 200 million miles away from the destruction, flew the Battlestar Galactica. She was a massive warship, both a fleet carrier capable of maintaining 4 Viper squadrons of 20 fighters apiece, and tactical battlecruiser, equipped with huge artillery cannons, anti-aircraft batteries, and nuclear warheads. (A fully-armed battlestar is capable of performing a wide range of offensive maneuvers while her defenses ensure the ability to engage enemies at close-range) 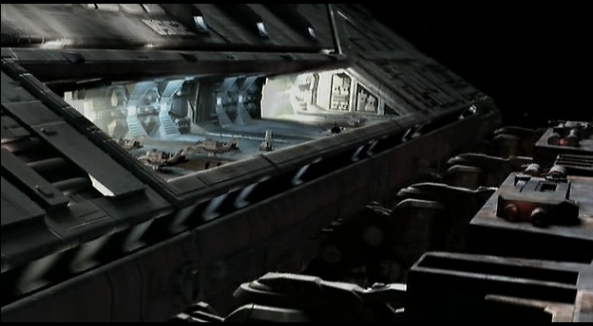 The Galactica was being decommissioned during the time of the attack, her Viper bays being converted into a museum, and anyone who was on board for the ceremony suddenly became one of the only 47,000 humans left alive in the universe.

Word of the attack spread across the galaxy, and many space-bound ships that were flying from one place to another for whatever reason, suddenly became the last hope for humanity… “the fleet.”  When the commander of the Galactica sent word for any remaining ships to meet them at a hidden military base called Ragnar Anchorage, a few dozen ships 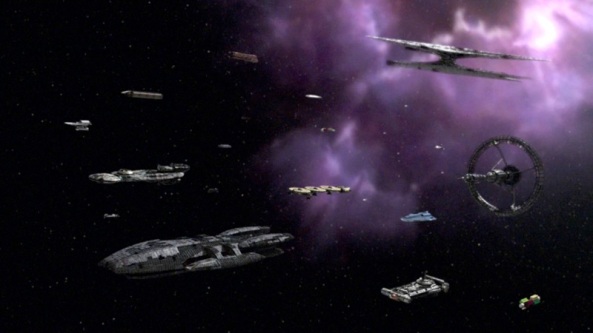 of varying size made it to the rendezvous.  The fleet was a rag-tag group of tankers, cruisers, civilian transports, etc, that made up the convoy led by the Battlestar Galactica and her crew… faced with superior numbers and firepower, the fleet jumped further than anyone had before… and kept jumping… hoping to out-run the cylons. Their worlds destroyed, their families gone, their hope crushed, the 47,000 people left in the fleet ran for the stars, their ships pointed toward an unknown destination- a myth handed down from the ancient scrolls- toward Earth.

“For now we have a refuge to go to. A refuge the Cylons know nothing about. It won’t be an easy journey. It’ll be long, and arduous. But I promise you one thing: on the memory of those lying here before you, we shall find it, and Earth shall become our new home. So say we all!”– Commander William Adama, eulogy for the dead (cont).

It was written that 13 tribes left for the stars in the great exodus. 12 of these tribes headed toward the many worlds of the Cyrannus star system, while according to legend, the Thirteenth Tribe of man headed in a different direction- toward Earth. It was this same direction that the survivors of the fall of the 12 colonies headed… into the unknown and uncertainty of space. Chasing myth and legend, Commander Adama lies and tells the survivors he knows where Earth is.

Among the surviving ships is the government vessel Colonial 12 (becomes Colonial 1), which holds the only surviving members of the Colonial President’s staff- and the Secretary of Education Laura Roslin. In the beginning moments of the escape, a government fail-safe device appoints her President due to the laws of succession only a few hours after being told she has terminal-stage breast cancer. Dr. Baltar, President Roslin, Commander Adama, his Executive Officer Colonel Tigh, son Captain Lee “Apollo” Adama, and adopted-daughter Kara “Starbuck” Threiss all become the major players in a tale that starts at the end of another.

[And so we find them, in the first few episodes, a mini-series created by the Sci-Fi channel and NBC, at the end of their worlds… on the run from a determined and deadly adversary… humanoid cylons in their midst (unbeknownst to most of the fleet). Humanity’s desperate search for a place to hide, to stop, and to live again.]