I don’t care what your excuse is, if you haven’t seen AMC’s iconic Sunday night show Mad Men, you are way behind. While it might not be the cup of tea for Two and a Half Men fans or Reality TV junkies, winning Best Dramatic series for three years might be a clue that you should be tuning in. In fact now is the best time to catch up on your Mad Men. Netflix has added every episode to it’s streaming service and AMC is preparing to rerun the entire show so far in lieu of the postponed March premiere of the next season. Normally those of us who define our Augusts by our Sunday night programming are euphoric due to new episodes of Mad Men, however due to the show’s producers wrangling with AMC over it’s future, filming is just now getting started for season 5.

In case you still haven’t seen it, Mad Men revolves around an old-school ad agency in the early 60s on Madison Ave in New York… and specifically it’s tormented, philandering, and extremely talented front man Don Draper. I could spend an entire post heaping rave upon rave for John Hamm‘s performance in this role (which has won him a Golden Globe and an Emmy Nom this year, by the way). Don Draper is the ultimate anti-hero, he’s handsome, smooth-talking, clever, and consistently makes every bad decision he can regarding his personal life. He is the ultimate American man of his time period- he drinks like a fish, smokes like a chimney, and screws everything that walks in front of him… and whose world, so intricately built and maintained, comes falling down around him as the show progresses.

What the show does so brilliantly is reflect the changing perceptions in America in the early 60s, from the changing role of women (at home and in the workplace), divorce, and political upheaval, war, and the rise of the youth movement and television. That may seem like a broad stroke, but the genius of Mad Men is it’s ability to handle these issues while not ever becoming preachy or over sentimental (no Wonder Years here).

What I believe to be one of the best episodes of the entire show comes at the end of the third season, and forgive my partial spoilers, but if you haven’t seen the show- you’ll forget anyway. Don Draper, whose marriage to Betty has been on the rocks for a season now, gets a double-dose of bad news in one day. First, his long-time employer Sterling Cooper, the hottest small ad agency in the business is about to be folded into the workings of a larger, overseas corporation- meaning the death bell for the careers of almost every talented character we’ve followed so far.

Secondly, his wife hits him with the “big D” as he comes home one night from the office. Sadly, their three children are also caught in the middle. In a brilliant scene that I imagine would spark total recall for millions of Americans, Don and Betty sit the two older kids down in the living room to explain the upcoming change in the family- to which they respond with painful, childhood honesty. When Don states, “I’m not going, I’ll just be living elsewhere…”

The oldest, Sally, responds with, “That’s GOING, you say things and you don’t mean them, you can’t just do that! You said you’d always come home…” before storming out of the room to leave the 6-year-old boy clutching his father’s leg and begging him not to go.

While this isn’t a strange or even original scene to see these days, however the way in which it is handled, the humanity of the children and the impossible explanation from their divorcing parents is so well portrayed that it stirs something in our collective memory. For most viewers, it hits us in the gut. The feeling that we’re not just seeing the Draper family fail, but our own childhood memories of divorce and separation are echoed across time- as it is easy to imagine these two small children as our own parents- compiles with our own adult experiences of going through divorce. How masterfully the writers handle the great tragedy of the late 20th century- the perceived crumbling of the American family. We know that the characters will go on as much as we are able to conjure up the post-divorce lives we or loved ones have lived in reality, and yet the tragedy of the Draper family is the tragedy of tens of millions of people across the country.

A tragedy that Don gives a perfect point to later in the episode while trying to convince his ex-secretary-turned-talented-artist/copy-writer Peggy to follow him as he decides to strike out on his own in the Ad game. “Do you know why I don’t want to go to McCann [the company attempting to buy out the agency]? Because there are people out there who buy things, people like you and me… and something happened. Something terrible… And the way that they saw themselves… is gone… and nobody understands that… but you do… and it’s very valuable. With you, or without you, I’m moving on… and I don’t know if I can do it alone. Will you help me?”

When Peggy asks him if she says no if he’ll hate her and never talk to her again, Don responds, “No, I’ll spend the rest of my life trying to hire you.” 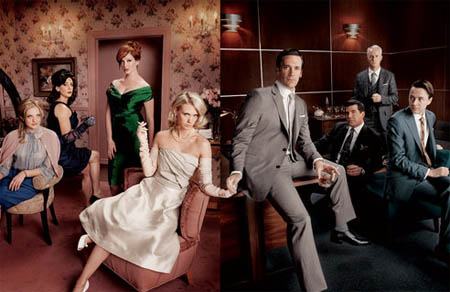 Now if you haven’t seen the show, this might seem trivial… but in the context of the episode where Kennedy has just been shot and America has been turned on its ear… it is the perfect scene to highlight the truest of human tragedy- the loss of innocence and identity in the face of perseverance and the American dream… and it is this symbolism and nostalgia-laced loss that is the real genius behind Mad Men. That while we struggle to maintain the status quo, the world gives us curve balls impossible to avoid, and our fight against that change is the source of our greatest hope- and our most tragic loss.

Tune in, this show is a MUST SEE!