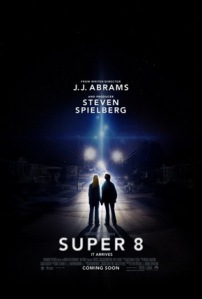 Sometimes movies are just plain magic. It’s been said that all magic is merely technology we don’t understand yet, and that may be, but when it comes to movie magic Super 8 is about as close as it gets to the real deal these days.

I’m 34 years old, and grew up in the early 80s as a creek-exploring, tree-fort building, outside-all day kid of kid… for the most part… I do remember getting in tons of trouble for dozens of  incidents involving going places I wasn’t supposed to go, being out later than I was supposed to be out, and be way filthier than I was supposed to be when I came home… and I do remember always living next to large wooded areas (in Oregon, go figure) that we spent countless hours playing away in (and receiving poison oak from). 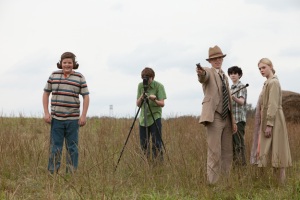 So what does this have to do with the latest summer blockbuster from director JJ Abrams? Well, that’s what the movie is all about… childhood, loss of innocence, fear of the outside world, and most importantly: imagination. Super 8 is about a young man (old boy?) who’s mother has just died in an accident at the local steel mill because she volunteered to take someone else’s shift.  Joe (Joel Courtney) is left with his father, a sheriff’s deputy, his dog, Lucy, and his good friend Charlie (Riley Griffiths), whom Joe is helping make a zombie movie with a Super 8 camera setup… the year is 1979. 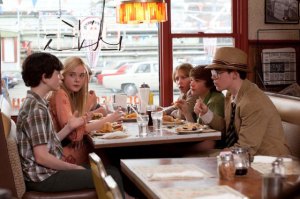 From the opening scene, a wake for Joe’s mom, it’s clear that this is no ordinary movie. The dialogue is fresh, the kids’ acting is phenomenal, and at some points  during their adolescent tirades, it feels like Tarantino is writing. In plain speak, it’s exciting from the very beginning because every single one of the characters is engaging, funny, and easy to like… it’s even got that horrible guy from ER in it as Joe’s love interest’s drunken father, and he does a great job. I’m talking all across the board, this movie is flying on green for most of the way.

Flash forward 4 months and summer has come to the little town of Lilian, Ohio. Charlie’s zombie movie is moving ahead full steam, and Joe seems to be hanging in there with a locket of his mothers that he carries everywhere he goes. Then Charlie decides to make some changes to the movie, and thus changes all their lives forever.

On the last day of school, Charlie informs Joe he’s written in a wife for the main character, Detective So-and-So, and has asked the enchanted Alice (Elle Fanning) to play the part… oh and she’s stealing her dad’s car to pick them all up at midnight for a trip just out of town at the old train station… to film a scene… “for production value.” All of this is handled with the light and whimsical banter of adolescents of yesteryear… in fact, when the sheriff sees a clerk wearing a brand-new Walkman he remarks, “That’s all we need, kids walking around with their own stereos… it’s a slippery slope!”

No by know we’ve all seen the preview for Super 8, so when the speeding train blows its whistle in the middle of the night, we as the audience know that some bad ju-ju is about to go down. Charlie hits the roof, “Grab the camera! PRODUCTION VALUE!” He screams, directing everyone to their places, “Just be louder when the train’s going by…” get us chuckling when the thundering train downs out all of the dialogue in their scene… and we can barely hear the screeching of tires far down the line at the next road… but Joe does. He turns in time to see the speeding truck pull up onto the tracks and head straight for the train before it’s hit by the locomotive, and bursts into flames. Then Joe sees the locomotive jump the track, and soon the entire train is flying through the air, 10 feet from them, at 90 miles an hour. This is about one of the most exciting action sequences in recent years, as even in the few short minutes the movie has been on, we’ve already grown very attached to the group of troublemakers. The effects are seamless, the sense of that metal hurtling through the air just inches from the kids as they run had me chowing liquorice like there was no tomorrow… whew! 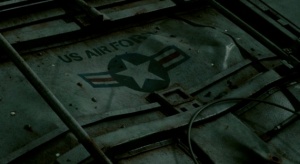 As the flying train cars come crashing down around them, and explosions are knocking these poor kids around like rag dolls, Joe gets seperated from the rest of the group… and soon the cacophony dies, and most of the train grinds to a halt… except for the car directly in front of him, which starts pounding. We know there’s something nasty in that train car, something big enough to rip the door off like it was cardboard, and thankfully Abrams makes the decision to not show it to us for another hour or so… Well into the Air Force investigation, military cover-ups, and adolescent first loves that make up most of this brilliant film. This is how great movies are made. You take an original story in a timeless setting, superior acting, and a skilled director, and the magic just happens (with a little help from the fx guys). 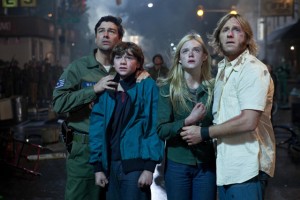 Now I have to admit, I’ve been following this movie for awhile and was just in one of those “absolutely excited to see it” moods, and I’m happy to report, that it lived up to almost all of my expectations. If you’ve only heard sketchy things about Super 8, do yourself, your family, everyone you know a favor and go see it immediately. This is one that will go down in the books, and that might even just be ok with JJ Abrams, who drew heavily from producer Steven Spielberg’s early films (you know, those little films like E.T. The Extraterrestrial, Raiders of the Lost Ark, or Jaws that practically invented the summer blockbuster?).

Super 8 is so much more than a movie though. It is a glimpse back into what some will feel like was a simpler, easier time… when everything wasn’t at our fingertips, and there was still a big, scary world out there for kids to want to explore…

One comment on “What the Hell Is That? (How JJ Abrams, Steven Spielberg, and SUPER 8 Saved the Summer Blockbuster)”