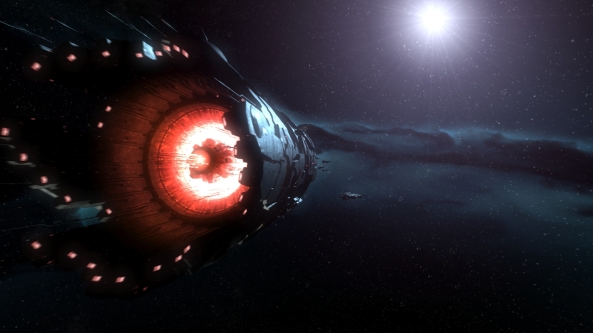 There is another galaxy (not so far, far away…) just waiting out there and I bet you didn’t even know it existed. I’m serious, it’s a universe where each planet is linked through a system of jump gates that allow instantaneous travel. In this galaxy live 5 different species, each with their own history and culture that has survived for thousands of years. The best part is, the galaxy is open for business.

When you first boot up a new game of X3:Reunion or X3: Terran Conflict, you have a choice whether you want to be a certain type of character. Let’s say a Teladi trader, or an Argon pilot, it’s up to you- and each pick has a certain amount of either $ or power (a bigger ship to start). From there the universe is yours. Either way you start the game, you’re going to be unknown in the galaxy… Especially in the sectors outside whichever you call home. Sometimes run ins with other races can be downright explosive, so it’s advisable to listen to any patrolling police officers or military presence you might hear hailing you when u jump into a new sector.

The thing about the X- Universe games, is that they are open for you to explore any avenue of the games basic point- money=power. Whether you decide to join up and fight the good fight, blasting away squadrons of pirates and ancient alien invaders known as The Ka’hK… Or decide to spend your time hunting down some of the many floating goodies in space- X3 has got all the epic space gameplay you can handle.

Save up cash early and buy yourself a freighter, begin to make some trade runs, get to know the galaxy. X3 has a fully-realized economy, where factors influence locally and universe-wide. There’s always a station or a mine that needs supplies and it’s up to you to find the best deals to buy, and where to sell those goods for prifitssss. Or there’s the less subtle route, hire some mercs to ride a suicide-mission in a shaky troop-transport long enough to board and capture a bigger ship, then hire more mercs and repeat.

Whatever tickles your space-flight fancy. As time goes on and you rake in the cash, you can buy bigger ships, huge TL tankers with compressed cargo-bays that allow for more freight. They also let you buy your own mines, solar-power plants, food processing stations, equipment docks, the works. You can even purchase special custom complex construction kits that allow you to hook stations together in order to minimize the amount of secondary resources it requires. It’s possible to build your

own self-sustaining weapons factory, for instance, or if you really want to make money- and don’t mind attracting shady characters- then a space weed plant is for you! Or an equally profitable Space Fuel Distillery!

Any way you cut it, X3’s open economy and diverse universe is fun, fast, and dangerous. Join up with the military and fight the war against a new threat- the Xenon horde. X3: Reunion, X3: Xtended X3: Terran Conflict, and now at long last X3: Xtended Terran Conflict… Designed, written, built, coded, and animated by fans for the fans. I played the MOD of X3: Reunion, it added new story lines, new bad guys, and a whole lot of fun! This time the saints behind the last one have bled, sweat, and teared- to bring us X3:XTC 1.1, the best iteration of the X3 universe yet… and it’s completely done off the books! By a coolest group of people around- the mod team.

I’ve been flying the unfriendly skies of the latest installment, and so far (even though no story-mode levels are included yet, have to wait for the 2.0 update) so good. The universe is complex, new, and this time: ever-expanding. The plot takes place several years after the last game, in a new portion of space known as The Expansion Territory. Linked through the recently rediscovered Aldrin system, the expansion territory is huge, adding over 100+ new sectors as time progresses in the game. Also revamped this time is the

ever-important Galactic News Service, which is now used to update the player on the progression of the expansion, the skirmishes in the galaxy, pirate hunts, and if you get neat enough ships, your name in print! Seriously thought, XTC is amazing so far. The artwork is brilliant, the music re-scored, each of the hundred plus sectors with a complete backstory and history. These guys have been busting their hump… and have put out a superior beta. I cannot wait for the official “game” release, to see how it all ties together in this ever-expanding galaxy.

Find your copy of any X3 game, and you will be addicted in no time. It’s a very different game than any I’ve played, sometimes a lot of the game can be waiting, programming, waiting for huge space battles to finish (if you’re a fleet commander like me, with eyes on taking over the known universe), and of course: making money. Thank you Egosoft for such an interesting universe to explore, and bless the mod team for making it the beautiful galaxy it is today. Until then, it’s your fleet versus mine.

5 comments on “X3: A Universe, Open For Business”