Are big changes in store for the Star Wars universe? The latest episode of Rebels gives us a long-missing piece to the puzzle of the Chosen One, and might give a clue as to the future of the Force.

In last week’s Star Wars: Rebels, Obi-Wan Kenobi faced off with the Sith Lord Darth Maul, who killed his Jedi Master way back in Star Wars: Episode 1 (before getting sliced in two and tossed into a bottomless pit). For those that don’t know, Rebels takes place a short time before the events of Star Wars: A New Hope, the first Skywalker movie. In this episode, Obi-Wan is shown living in hiding in the desert, watching over a certain plucky teenage moisture-farmer who has no idea that the fate of the galaxy is about to come squarely down on his blonde head. Obi-Wan and Maul don’t fight long, but before they do the Sith figures out that his Jedi nemesis is hiding on a back-woods desert planet for a reason… Because he’s protecting someone. “Is he The Chosen One?” Maul asks, and Obi-Wan nods.

I’ll give you a minute if your mind is blown.

If not, scrape the crust from the memories of the George Lucas Star Wars prequels and remember that originally Anakin Skywalker was hyped up to be the Chosen One, a powerful Jedi who would bring balance to the Force and destroy the Sith. Instead, life got in the way and Anakin went full-aggro after letting himself be manipulated to the Dark Side by the Evil Emperor. Obi-Wan, who felt responsible, gave us the only good lines of dialogue from those movies, “You were supposed to destroy the Sith, not join them! You were supposed to bring balance to the force, not leave it in darkness!” and then took off to go watch over Anakin’s children. So either Anakin/Darth Vadar was the Chosen One and the prophecy was crap, or he wasn’t, and all that immaculate conception stuff was just crap his mom made up… Hmmm.

We were never told either way who the Chosen One was, and many believed after The Force Awakens that it might be Rey the Force-powered heroine of the new trilogy… Until the latest episode of Rebels that is… Now it’s on record.

Luke is the Chosen One.

Obi-Wan’s revelation got me thinking about the nature of the Jedi and what the Chosen One “bringing balance to the Force“ could mean in the new Disney era of Star Wars. Most of the internet believes the title of the new Star Wars, The Last Jedi is plural (As in, these guys are the last Jedi, not this guy is the last Jedi) But what if the internet is wrong and title is literal? Yoda did tell Luke back in the swamp, “when gone am I, the last of the Jedi, will you be” and the title crawl at the beginning of Episode VII clearly says “…Skywalker, the last jedi…”

But what if the term Last Jedi doesn’t mean, “he’s the last before there were more”? What if the Jedi die with Luke?

The Force Awakens doesn’t tell us much about why Luke has decided to leave it all behind and go stand remorsefully on a rock. We get that he tried to restart the Jedi Order, he tried to train some Force strong students, and that it all went to shit. So obviously, even in a post-Empire world, power corrupts. Luke can’t stop his own nephew from giving in to the dark side and his best laid plans got a bunch of his students killed before he split and turned his back on The Force… Supposedly.

The nature of the Jedi/Sith relationship is very complex. Jedi are the Buddhist warrior monks who swear off attachments and desires in pursuit of a deeper meaning of love and the greater good, while the Sith are the emotion-wielding fear mongers that use their moods like gunpowder. It’s the classic ying and yang, light and dark scenario. One simply cannot exist without the other, and Luke Skywalker keeps learning this the hard way. If you think about it, how did he save Darth Vadar in the first place? With selfless love. In the end, Anakin Skywalker didn’t want to watch his only son die, and his selfish hate was broken by the selfless love of a parent for a child. It would be ironic that two sides of the same whole have battled it out for thousands of years, locked in a battle that neither side can win, destined to repeat the same mistakes again and again while the fate of the galaxy gets dragged along behind them.

In rides the plucky teenager with the lightsaber to save the day.

In this modern era of Star Wars, it makes sense to leave the old schools behind. If Luke Skywalker is the Chosen One, and the Last Jedi, it’s conceivable that going forward there will be a new kind of Jedi. That Luke will be able to train Rey with balance in the Force. Someone able to feel without giving in to the dark side, able to wield parts of the light and the dark. After all, they are two pieces of the whole, one cannot exist without the other…

When the new Star Wars opens this December we will find out what the scoop is.

You have to understand that Star Wars is an intensely personal thing for millions and millions of people. There are endless streams of little boys and girls that have grown up swinging lightsabers and fighting over who gets to play Han and who gets to be Luke. How many of us remember when there was actually a viable love-story between the beautiful space princess and the cocky kid from Tatooine? How many of us remember going “NO WAY!” when we learned they were brother and sister, having spent so many afternoons trying to save her from the Death Star, and ending up playing a Star Wars version of house after the blaster-fire settled? I grew up with Star Wars figures in my hands 24/7. I still have stormtroopers on my shelf in my office, alongside my Darth Vadar head walkie-talkies. I have loved it so long, I don’t remember my life without it.

I’m not alone. I don’t even go to conventions or cosplay, I’m just a “normal” Star Wars geek. Think of all the people that are ACTUALLY obsessed with it. (oh, wait…) Over the decades, not even the “enhanced special editions” (with added lame computer graphics) nor George Lucas’s prequel trilogy could ruin it for me… The Phantom Menace is literally one of the worst movies I have ever seen. Only Ewan McGregor was worth a damn, and I will always cringe when I see Hayden Christenson’s ridiculous whinging face.

So when I heard that Disney bought Lucasfilm and had tapped JJ Abrams, today’s hottest action director, to helm Episode VII, that 9 year-old child inside of me that had been lightsabered into pieces and tossed into a lava river by George Lucas jumped up and down on the bed like he hadn’t done in decades. On the outside, I’ve kept my cool.

Until now. I’m officially freaking out.

We are now days away. The premiere happened in LA last night, and the reviews will hit the internet tomorrow. I’m only one of probably hundreds of thousands of people that are sitting at a laptop writing about Star Wars right this very second. I doubt anyone outside of my Facebook friends will even read this, and even that is rare… Who wants to read ANOTHER Star Wars article? I haven’t allowed myself to get sucked into the hype beyond looking forward to it. I don’t want to know anything about the plot before I see it on the screen, which means I’ll have to stay off the internet for a week before I can go see it Christmas weekend.

This is a tricky thing for me. On one hand, Star Wars has been in my life longer than any other relationship outside of my birth family, I’ve loved Luke Skywalker and Han Solo longer than any other characters in the whole universe of different “universes” out there… When I think of science fiction, pictures of the Falcon zipping through asteroids or weaving through the reconstructed Death Star flash in my mind for pity’s sake. Seeing the original cast all old and grey only reflects my own nearing middle age. Luke Skywalker probably won’t be swinging from any tiny ropes this time… although I’m not counting out him doing some kind of CGI-enhanced Yoda flips with a lightsaber in his hand (a reality that both saddens me, and makes me very happy at the same time), Han broke his foot on the Falcon’s door, and Leia probably won’t fit into Jabba’s bikini anymore… But despite the next generation taking over, I really only have one concern. Us Original Trilogy types might be a little wider in pant size, but we know more about the Force that these Midiclorian-loving Pod Racer types…

The Force is the beating heart of the Star Wars stories, and yet it’s always been treated as a gimmick or a weapon. While Yoda and Obi-Wan might’ve talked a big spiritual game, when it came down to it, it was always “can I throw this large object at someone with my mind?” or “Now I will turn into a CGI-character who can move like a super hero!” JJ Abrams might be a superb movie maker, but if the Force Awakens leaves the Force out in the rain like the other movies, I will be sorely disappointed.

After all, its an invisible energy force that surrounds everyone and everything, binds them together in a galactic fate that hints of prophecy and redemption… There are aspects of Star Wars lore that mean more than the sum of their parts. They create wonder and yearning in the heart, tempting even the most cynical to look to the stars and dream of other worlds. They weave in and out of the imagination, surrounding us, binding us together in a shared experience that reflects the very story being told.

The Force might not be real, but in a way it is. While we can’t move things with our minds or shoot lightning from out fingers, Star Wars fans are all united by the same shapeless “force” shared in those moments when lasers flash across the screen or when a spontaneous lightsaber duel breaks out in line for the midnight show. 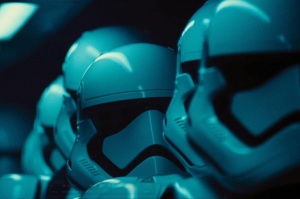 It is a “force” of dreams and imagination, of spaceships on fire and epic struggles for the future of the galaxy. It is hope in the face of evil and despair, it is a chance for redemption after a lifetime of mistakes, it is the ache of home and the futility of fighting destiny.

From everything I’ve seen, and from my level of trust in JJ Abrams, this is going to be one of those rare moments in life where everything converges at once around some popular culture event. Where an artist has been given the tools necessary to unite the past, the present, the future, emotion, imagination, laughter, and family… And it’s all thanks to a few short hours of film and a whole lifetime of dreams.