“The path of the righteous man is beset on all sides by the inequities of the selfish and the tyranny of evil men… And I will strike down upon thee with great vengeance and furious anger those who would attempt to poison and destroy my brothers. And you will know my name is the Lord when I lay my vengeance upon thee.” –Pulp Fiction

“I don’t deserve this… To die like this…”   “Deserve’s got nothin’ to do with it.” –Unforgiven

What is it about the western? They are straight genre-fiction, practically paint by numbers storytelling, but they always transcend their cliché elements and rise to be something more than the sum of their parts… Well, most of the time.

For a long time the western was dead. Unforgiven made sure of it. Clint Eastwood’s Academy Award winning masterpiece rang the death knell for a genre that had been sputtering for years. (I’m looking right at you, Bad Girls) However, recently a few European filmmakers have ushered in a much-needed revival. Andreas Prochaska‘s The Dark Valley, and Kristian Levring‘s The Salvation, are not just two of the best westerns in the last decade, but easily two of the better films I’ve seen in the last few years.

Whether it’s me or not, Hollywood is busy pumping out teen-friendly science fiction/superhero blockbusters, the indie scene is fascinated with crime dramas, and everything worth watching has migrated to the small screen. You can’t get better viewing than Mad Men, Game of Thrones, House of Cards, or Better Call Saul, so why bother going to see Fast and the Furious part SEVEN? (I’m kidding though, I love James Wan and RIP Paul Walker, I totally want to see that). My point is that “the movies” are in a lull. That will all change in a few weeks when Age of Ultron drops and summer season begins, but that’s what I’m talking about.

In The Dark Valley and The Salvation, the theme is similar: revenge. Both are brutally realistic in their violence, which is always interesting to see through the lens of a director that’s not from a country so obsessed with guns. In Dark Valley, for instance, a key shoot out hinges on a new piece of technology and provides another layer to a tried and true western trope.

Available on Netflix, The Dark Valley is a unique look at what the “Wild West” might’ve looked like in the Austrian Alps. Sam Riley plays the a-typical Stranger, who rides into an isolated town just before the winter snow blocks access to the outside world. Under the guise of bringing photography to the town, it is quickly plain to the two women that are lodging him that his intentions go beyond just recording the beautiful countryside and taking engagement photos… Especially when the power-drunk sons of the local town boss make it clear he might not make it through the winter if he stays.

The Salvation is another revenge story, but this time set against the backdrop of the American west. It follows two immigrant brothers from Denmark, one of which is played by Mads Mikkelsen (of Hannibal fame). When his wife and son arrive from the old country, their family reunion is cut short by a band of bad guys who just so happen to be riding the same coach, and who are neck-deep in a conspiracy to drive off the locals. Also starring a scene-stealing Jeffrey Dean Morgan and the gorgeous Eva Green, Kristian Levring’s gritty parable was filmed in South Africa, and will be released in May. 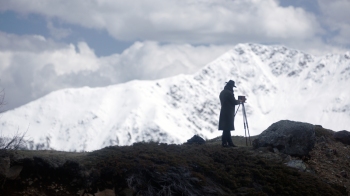 Both are heavily influenced by Unforgiven, and yet both also have their own clear voice and style. Whether the music and cinematography of The Dark Valley, or the stark desert landscapes and emotionally charged story-telling of The Salvation, both are easily two of the best westerns I’ve seen in a long time. Neither film panders to the audience, instead the filmmakers play their cards close to the chest when it comes to plot and it works in both cases. I like a film that makes me think, that drops me into a story without giving me a bunch of back story up front. There’s an immediacy that gets lost in exposition.

In either case, I’m glad to see the gritty, old-school, bad-ass western is back.. We’ve all suffered through enough Kevin Costner, Cowboys and Aliens, and The Lone Rangers…