Bioware‘s massive science fiction franchise Mass Effect has been a favorite of fans for half a decade. If you like epic storytelling, ass-kicking heroes, and an open-world galaxy to explore, Mass Effect should be your next play. Spanning 3 hit games, a graphic novel series, a handful of books, and many more, Mass Effect is modern sci-fi entertainment at its best.

In the future, humans will live among the stars as newcomers to the galactic melting-pot. A well-established society of aliens living amongst themselves exists out there, and we’re just the latest, hot-shot kids to the table. That means we’re always getting picked on, always getting the shit jobs, always without a shred of respect from the others races of the universe. From the blue-skinned and beautiful, ancient and wise Ansari, to the religious, jellyfish-like Harnar, there are dozens, if not hundreds of intelligent species out there.

What we lack in experience, we make up for in everything else.

Out of all the races, none seem to encapsulate the full range of knowledge, wisdom, experience, emotion, drive, self-reliance, like us humans. So this makes us simultaneously the butt of all jokes and the object of all desire. Ironic right?

It was mankind’s settlement on Mars that finally kick-started interstellar spaceflight and propelled us into the galactic community in 2148. When scientists begin poking around the planet’s south pole they find a long-abandoned alien outpost buried underground… Proof that we are not alone in the universe. Mankind’s identity is shaken to the core. Religions fall, tensions ease, and peace begins to take shape after centuries of strife. Technology from the alien outpost is adapted and it isn’t long before another, even more important discovery is made. Charon, the frozen moon of Pluto, is actually an ancient alien space station known as a mass relay…

A giant slingshot. Believed to be built 50,000 years before by the ancient and powerful Prothean civilization, with the help of the relays mankind begins to explore the galaxy. The Systems Alliance Charter is signed by the 18 largest nations on Earth, and for once humanity starts acting like a single species instead of squabbling children.

Soon colonies begin springing up, the first in the Arcturus system, where the massive Alliance Fleet is built, then later at Terra Nova and Eden Prime. Aided by the Alliance Military, mankind settles into the galaxy, still unaware of the bustling universe of alien life around them.

Until scientists at Shanxi begin an attempt to restart a dormant mass effect relay, and are attacked by an unknown force. Unbeknownst to us, activating dormant mass effect relays is a strict no-no. What bumbling children mankind is, throwing their ego around wherever they go, assuming they are the wild west inheritors of the galaxy. The incident at Shanxi ignited what is now known as the First Contact War.

All in all it was a big misunderstanding. Isn’t it usually?

A Turian patrol came across an unknown life form (us) trying to jump start a gate that led to a sealed-off section of space inhabited by an extremely dangerous species known as the Rachni… The Turians had no idea who we were, they just saw some life form breaking galactic law so they killed it. We fought back, they fought back, we fought back harder, escalation, escalation, then “Woops! Sorry!”

Humanity stumbles onto the galactic stage as the shoot-first-ask-questions-later kind of irritant we’d normally shrug off. First impressions aren’t always the best.

UP NEXT: The Citadel

What’s millions of years old, maintained by a race of little green guys, and perfect for the propagation of sentient life in the galaxy? The best damn space station ever built, that’s what.

Welcome to the Citadel. 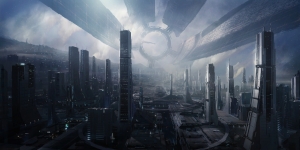