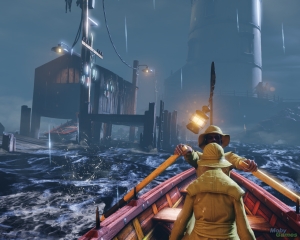 It’s like a dream. No sense of time, no sense of how I got here, or what’s going on… But alas I find myself in a dinghy off the coast of Maine, accompanied by the strangest pair of siblings I’ve ever met. Stormy seas churn the water around the small boat while my two companions chatter away about things I don’t understand. Up ahead, the turning beam of an island lighthouse pierces the darkened sky. The brother keeps rowing while she hands me a small box, smiling. There is something about these two, a glow about them, as if they had their own source of light.

As she hands me the box, she states matter-of-factly, “bring us the girl, and wipe away the debt.” Inside the box I find a dusty old photo marked Elizabeth, a silver key with a cage on it, a few pamphlets and pieces of paper… and of course, a gun.

Where I come from, there’s always a gun. 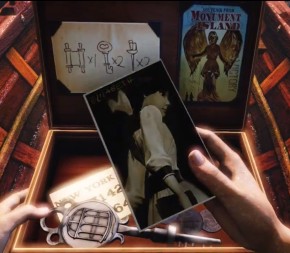 The year is 1912, and I’m standing in the pouring rain, trying not to capsize the damn boat while I climb a ladder to the dock above. The chattering twins wave goodbye, resuming their nonsensical arguing over particle physics and quantum mechanics, and I begin to wonder if the things they’re saying aren’t, in fact, somehow important… Somehow vital… Like clues to a puzzle I haven’t seen…

I make my way to the roof of the lighthouse, but only a large glass door greets me, barring passage to the inner chamber. On the outside of the door are symbols I remember from somewhere, but I can’t seem to place them… Until suddenly it dawns on me, and I pull out the photo and turn it over. Drawn on the back are the same symbols, with hash marks next to them. I figure what the hell right? And I hit the symbols in time, each one sending out an organ-like sound into the dark grey clouds above… Each symbol a different note… Then I wait, but not for long.

Behind me, above me, all around me, sound waves shake the foundation of the island as thundering blasts from some unseen horn seem to come from heaven itself. Deep red lights burst through the clouds with each thundering blast, shaking the glass panels around the top of the lighthouse. For a minute or two the music from the lighthouse and the music from the clouds seem to talk to each other, holding some kind of deafening tonal conversation…

The doors open behind me, and I find a dubious looking chair has swung up from the floor. With nowhere else to go, I sit down. “Prepare yourself pilgrim, the bindings are for your protection.” A woman’s voice tells me as the doors clamp shut, an alarm blares, shackles spring out of the chair around my ankles and wrists, and all I can think of is what a fool I am for walking right into this obvious trap. I’m gripped with the realization that no one is going to pay my gambling debts, no one is going to offer me a way out. This is it. The Pinkertons have set up some elaborate trap for their number one most wanted ex-employee, and I stepped right into it. 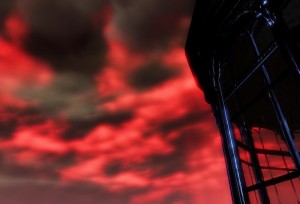 My name is Booker DeWitt, shamed at Wounded Knee, the horrors of war, and the depths of the bottle. I gambled my way into the worst kind of debt, and now I’m going to die in some kind of electricity-chair trap. I close my eyes, drop the box, waiting for the end…

But then the building starts to shake… Like an earthquake I feel the lighthouse begin to sway in the black stormy sky. There’s a rumbling underneath me like a million fires, and for a second I think the lighthouse is collapsing as I open my eyes to see it begin to fall away through a small hole in the door. I stare at that tiny black hole, covered in the dark of the storm clouds, until suddenly a shaft of light blinds me. It’s not until then I realize I wasn’t falling at all, but flying. The rumbling was not the lighthouse collapsing, but some kind of engine beneath me.

Not a trap, but a flying machine, taking me high into a perpetually cloudy sky. The woman’s voice counts off the altitude as I rocket up past fifteen thousand feet, and the engines cut out. I brace myself for the fall, feeling my stomach drop, but it doesn’t come. Instead I glide down slowly toward the tops of the billowing white clouds, only to see gleaming white towers of brick, mortar, and stone. 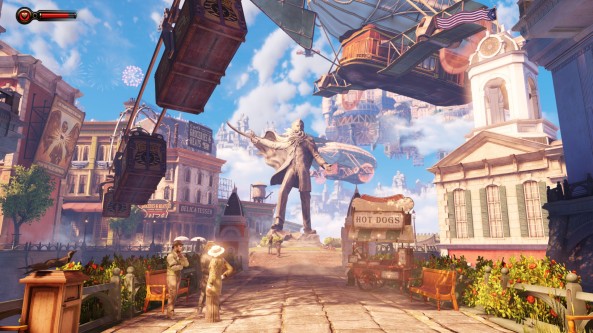 This is Columbia, the mysterious city in the clouds that disappeared decades ago after its tyrannical religious leader, the “Prophet” Zachary Comstock, declared it the truer ideal of America and seceded from the Union… And the setting for Irrational Games’ 2013 blockbuster Bioshock: Infinite. A city that has shrugged off the shackles of modern American life for a utopia in the Clouds. Governed by the Prophet and his vast army of soldiers and mechanical monstrosities. Columbia is an ever-growing Eden in the sky. The last bastion of true American ideals as the world below descends into the chaos of the 20th century.

Held up by quantum particles suspended in space (and time), a technology developed by the city’s brilliant scientist and co-founder Rosalind Lutece, Columbia is an awesome sight. Whole city blocks, squares, museums, theme-parks, even a floating beachfront all hang gracefully in the sun-lit afternoon, linked by a vast network of rails and gondolas that carry people and freight from one place to another. Columbia is breathtaking. A steampunk masterpiece of lush gardens, fairs, carnivals, and houses. Imagined by Comstock, funded by the US government, and held in place by Lutece’s quantum-levitation machines, Columbia was completed in 1893. Originally presented as a floating Worlds Fair, the enormous city circled the globe for years touting the supremacy of the United States of America… Before Comstock’s true vision of a modern-day Ark came to fruition…

Thanks to 2K and Irrational Games, Infinite (the third game in the Bioshock series) gives us one of the more imaginatively realized settings in video game history. A flying city where experimentation into quantum physics has allowed the upper crust to thrive amongst the technological marvels brought through from other dimensions and other times (getting the Tears For Fears song now?). A place where on the surface everything gleams of peaceful utopia… But just below the cobblestone streets and the green gardens lies a horrible truth… This American Utopia only exists if your skin color is white… A fact that snuck up on me during the first few minutes of the game when I found myself caught up in Secession  Day festivities that included an old-fashioned, all-American stoning of a bi-racial couple. Heavy topics like racism, slavery, inequality, and quantum string theory aren’t usually present in your average blockbuster adventure game.

Nevertheless, Bioshock Infinite still manages to be one of the best I’ve ever had the privilege to play through.

A mission to save a girl soon turns into a fight to save the known universe as inter-dimensional travel and catastrophic powers threaten to rip apart the very fabric of time and space… And only one man, tortured by guilt for deeds he can’t remember and a past he can’t seem to escape, is the only hope for the future of mankind. With Elizabeth, in tow, Booker must battle the forces of The Prophet as a brutal civil war rages across Columbia. When she’s not tearing holes in between dimensions or fishing ammo out of thin air, Elizabeth is an entirely sympathetic character that exceptionally contrasts Booker’s anti-hero status.

Bioshock: Infinite is available on PS3, XBox 360, and PC. It’s even available for free for Playstation Plus subscribers, which is how I laid hands on this instant classic. Despite never making it far into either of the first two Bioshock games, Infinite got its hooks in deep from the first few minutes. Blending elements of sci-fi, mystery, steampunk, and fantasy together, this game’s plot is one of the better thought-out stories in recent gaming history… 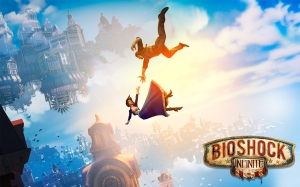 With a twist that will have you mulling over the implications for days, and an ending that will send you straight to the internet to find out what the hell just happened, it’s no wonder Infinite was voted third best game of 2013 behind Grand Theft Auto V and The Last of Us.

In fact, the only complaint I have about an otherwise immaculate game, believe it or not, is the insanely graphic and over the top violence. Normally I wouldn’t have an issue, but in this beautiful world of gorgeous backgrounds and suspenseful storytelling, it’s out of place. So much so that it detracts from the game itself. Yes it’s a video game, but do we really need to see Booker shoving his grappling hook spinning hand-thingy into bloody face after bloody face?

I suppose it’s on purpose. A contrast. Something to show the hypocrisy and the brutal truths of Columbia in their own light… But as much as Elizabeth looks like Belle from Beauty and the Beast, it’s hard to turn around and pop a guy’s face off when she’s watching. It makes the violence more real and yet sterile and detached at the same time. Oh well… I don’t mind, but Infinite is something I’d love to show my son more than the first few minutes of. Irrational is limiting itself by succumbing to the bloodlust of its hardcore fans. Why not every once and awhile make a game where the evisceration of your enemy isn’t the hook to get people to buy it…?

Oh well, for a game that I downloaded because it was free and played because I remembered hearing it was great, I can’t believe I almost missed this gem. Most movies don’t get a plot this realized… Even if it starts to get a little dodgy at the end due to all of the multiple universes and time travel and what not… It’s still one of those rare games that manages to expertly use pacing, acting, setting, and storytelling to evoke real emotion. I found myself at the end of the game, knowing that my next button click would reveal the final twist and end the game, and I couldn’t do it. I found myself in the strange position of saying goodbye to a character in a video game… Because after everything we’d been through together, it just somehow seemed right.