The only bad thing about the Cinemax thriller Outcast, is that it’s so damn good that people won’t tune in to check it out. Whether it’s because of preconceptions about genre, an aversion to quality, or just the fact that audiences want to shut their brains off- people don’t watch the best stuff. That’s why nobody’s ever seen half the Best Picture movies, and it’s why shows like Outcast, Legion, and Crashing fail.

Unlike a lot of other “horror” shows on the air, there are some truly creepy and sometimes downright scary moments in the Robert Kirkman-produced drama. However, despite the demons and the exorcisms, Outcast is a detective story both meticulously written and precisely shot. It’s put together like a puzzle, one deliberate and exact piece at a time… Often hiding clues in plain sight (a huge I Want to Believe poster in one of the opening shots, but I’ll come back to that) to keep the viewer glued to the screen at any given time. 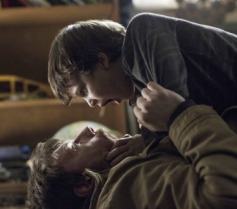 Over the course of the first season, Outcast tells the story of two men battling demons both internal and external in the sleepy town of Rome, West Virginia. The main character Kyle Barnes (played by Almost Famous‘ Patrick Fugit) grew up in Rome, raised by a single mother who succumbed to a violent and abusive possession when he was younger. Flashbacks show her stalking him through the house like an animal, from the shadows, knocking him around and dragging him by his hair into the pantry closet Carrie-style. Years later, Kyle has moved into his mother’s old house after a domestic violence incident involving his wife and daughter. Here he meets up with Reverend Anderson, an older and somewhat wiser man, who tells him he has been fighting these “demons” for years. He is the kind of preacher that believes he is one of God’s holy warriors, and who has a Friday night poker game every week with the mayor, the sheriff, and the fire chief. Like Anderson, Outcast holds its cards close to its chest the entire game. From the first episode, there is very little exposition or set up, instead the writers keep the focus on the characters themselves as things happen around them.

Outcast doesn’t rely on gimmicks, special effects, or flashy camera work like so many others do these days to stand out from the pack. Instead it is expertly crafted in a minimalist style, dolling out scraps of info here and bits of clues there. It’s part detective noir, part character-driven horror/thriller, Outcast reminds me of a scarier version of Netflix’s Bloodline or HBO’s The Leftovers, operating on many levels at the same time.

Most shows these days spend an inordinate amount of time making sure the audience is following along. Outcast correctly assumes that most people can follow a plot without laying things out every step of the way… And it works extremely well in this case. The writers hook us in the first episode with a possession case that goes right for the gut- (SLIGHT SPOILER) – a young boy named Joshua nearly chews his finger off absentmindedly under the influence of some evil entity. When the Reverend and Kyle finally arrive to try and help the boy, the demon recognizes Barnes, calling him the Outcast and asking about his mother (who has been in a vegetative state for decades). Along the way, Kyle is bitten and some of his blood seeps into the boy’s mouth, causing him to convulsive and react violently, eventually spewing forth some kind of swirling black oil demon that dissipates into the air.

It sets up a very compelling mystery right from the beginning… What exactly is going on in Rome, and why are so many people showing signs of demonic possession? And what the hell is “the Merge”? Some kind of Demon Apocalypse?

While the Reverend and Kyle Barnes play Demonic Hardy Boys, Kyle’s adopted sister Megan struggles to balance family life with an ever-increasing level of insanity in town. The sheriff follows a different set of clues following an arson that may or may not be connected to the rest of the town’s goings-on. Meanwhile a mysterious stranger shows up in Rome who seems to know a little more about the Merge than he might be letting on. All of these side-plots and interconnected story lines weave seamlessly through one another at the hands of shrewd and talented writers who have so far been able to ratchet up the suspense with every new episode.

As things near a boiling point this Friday night, Kyle and the Reverend must keep their eyes on the goal as distractions come at them from every angle. “The nameless, the numberless” descend on Rome for the Merge, and the stakes have never been higher for our two heroes. As they piece together more of the mystery surrounding the demons in their midst, the true nature of the intruders themselves comes into question. Are they really Satan’s minions, or are they perhaps invaders from some other place? (Back to the I Want to Believe poster in the opening shots of the show…)

If you haven’t check out Outcast for one reason or another, it’s not too late. All episodes are available on Cinemax’s streaming app, and it looks like iTunes has the first few as well. As usual, there are less upstanding ways to watch, only a few short Google searches away. Give it a shot, if you are a fan of good drama and like a few thrills, you won’t be sorry. I’ve already re-watched the first episodes and realized how many things I missed the first time because I didn’t have the other puzzle pieces that come later. Cinemax liked it so much they ordered a second season before the first episode even aired… I agree wholeheartedly.