Before I get into it, I told myself I wasn’t going to write another glowing review without saying something first: I don’t love all movies. While it might seem like I offer up glowing praise for every piece of celluloid on the planet, the simple fact is that I don’t go to bad movies. I skip the White House Downs and the Texas Chainsaw Massacres. Those I watch when I have the time… On Netflix or cable or whatever. I also don’t feel the need to write reviews of the shit I do see. 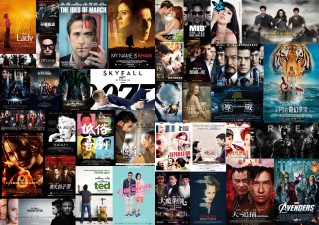 Does that make me a bad reviewer? I don’t think so. It makes me a practical one. I don’t write reviews for idiots. If you don’t know what you’re getting into when you go see Step Up 2 the Streets, then I’ not going to waste my time or yours telling why you shouldn’t. People go to see movie because they like the subject matter, they hear it’s really good, they like the people making it, or they’re just curious. If Grown Ups 2 is your thing… By all means go see it! I won’t pay to, but that’s cause I have to pay to see my movies and I’m not rich. I go see the ones I really want to see, and if it is a great story, or even just deserves to make more money, I want to spread the word.

If any movie deserves to make a billion dollars this summer, it’s Pacific Rim, and if there is any justice in the world it will. Not since Avatar have we seen such an original universe so rich and full of life from top to bottom. We don’t get a lot of big-budget Hollywood action movies that aren’t sequels or adaptations, and here is a glaring example of why originality still counts for something. Director Guillermo del Toro (Pan’s Labyrinth, Hellboy I & II, The Devil’s Backbone) already proved his big-budget chops with Hellboy II,  one of the best comic adaptations ever made. With Pacific Rim, he gets a chance to shine. You hear a phrase every once and awhile, that “here is an auteur at the top of his game…” And to some degree this is completely  right. However with a Guillermo del Toro film, you feel something more, something you don’t often get mid-summer:

You remember when George Lucas went back and added all that digital crap to Star Wars to make it seem like a busier, more complex universe? 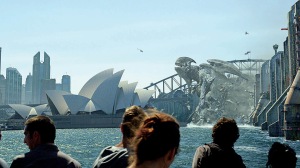 Well what he was trying to do (albeit failing) was inject life into the “world” of the movie. Details, details, details. You see, if you provide a vibrant, believable backdrop to the action going on, the setting and the story feed off of each other… A perfect storm of yarn-spinning if you will… And it all stems from the imagination.

Guillermo del Toro chocks more life into Pacific Rim than 10,000 Hollywood-reboot-blockbuster-franchises put together. That’s easily his greatest talent. He takes these huge, fantastic ideas set in lush, vibrant settings, and sells them like gold on the screen. I mean come on, a future where giant monsters start coming through a dimensional tear at the bottom of the ocean? That’s a huge pill to swallow when it comes to suspending disbelief. Del Toro does it without breaking a sweat.

Every single second of Pacific Rim had me glued to the screen, shoving candy and popcorn in nervously as I ran the gambit of emotions from suspense and scares to awestruck fascination at the amazing display of sheer kick-ass robot power… To even real human connection, humor, love, and grief… This film contains all of the reasons why we like to go to the movies in the first place. It has heart, it has a fantastic story, the special effects are seamless, and the entire time I felt as if I wasn’t just watching a movie, but that I had a front-row seat to del Toro’s endless imagination.

Despite the marketing machine that would have you believe this movie is another Transformers, don’t believe it. Pacific Rim is one of the few that breaks the mold. There are bits and pieces of different stories we’ve heard before, but never like this… And the best of all? There so man of those Karate Kid, stand-up-and-cheeer moments that you’re going to find it hard not to yell at the screen during some of the fight scenes. 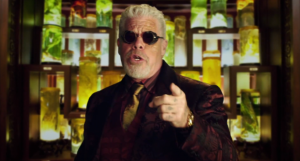 It’s epic action film making at it’s best. For what it is, there’s nothing else like it in the history of film. Seriously. This is the special effects bonanza that all the other CGI actioneers in the last few years have promised. It’s the perfect summer movie.

Can you tell I think you should go spend your money on this? Guess what I get for saying so? Not a goddamn thing… In fact I’m paying to tell you… But that’s ok… Cause hopefully some people will agree!

Set in the near future, giant skyscraper-sized monsters called Kaiju start attacking the major coastal cities. After we kill off the first few with conventional weapons tanks, missiles, bombs, (all at the cost of tens of thousands of lives) it becomes clear that the attacks aren’t going to stop. A new kind of weapon must be built:

The Jaegers. Giant battle machines that are driven by two pilots. There has to be two pilots because, of course, the neural load of the Jaeger‘s systems is too much for one to handle alone.

So teams of pilots join minds, linking to the opposite hemisphere of the other pilot’s brain in what’s called “the Drift…” a place inside the memories and minds of the pilots, where their special suits allow them to become the giant machines in body, mind, and even spirit.

They’re Rockem-Sockem robots, there’s no denying it… But I’ll be a monkey’s uncle it’s as if del Toro captured all those childhood toy-time fantasies and served it up on the screen. I forgot I was watching a movie, got lost in the story, and loved nearly every second of it.

Let’s face it, most movies just sit there on the screen. You watch them, they’re done. You might talk about them afterward with your friends, but for the most part movies are fast-food. Pacific Rim is like a kick-ass, authentic, seven-course meal at La Casa Del Toro.

I don’t want to spoil any of the plot, but let’s just say the war goes well for awhile… but the Kaiju keep getting bigger, stronger, and meaner. Until one day the unthinkable happens to the world’s most hot-shot pilots. Faced with a growing threat, and dwindling support, the Jaeger program is mothballed in favor of building giant walls along the shorelines of the world. Soon the Kaiju start coming more often, and it’s up to the a rag-tag group of heroes, rejects, and geeks to save the world.

It borrows heavily from Independence Day, but thankfully not in a Randy Quaid kind of way… More like a Will Smith/Jeff Goldblum chemistry kind of way. The cheesy-yet-still-easy-to-swallow way.

Go see this movie in IMAX but bring your ear-plugs if you’re not deaf like me. It’s big, loud, and bad ass… It’s more than the sum of its parts, and it deserves to be seen. I’m ready to see it again, it’s one of those movies where you miss half off what’s going on because there’s just SO MUCH GOOD STUFF!

If there’s any justice in the world Guillermo del Toro will now be cemented as an A-list action director who can deliver the goods when it comes to original, thought-provoking films that appeal to all ages and tastes… And hopefully it shows that not all blockbusters have to be sequels, reboots, or rehashes.