What do you think of when I say the word fear?

I’m talking about real fear, like terror, horror, sheer “f^ck fight, FLIGHT!” kind of jump-out-of-your-shoes afraid. Where the fear touches a primordial place in our basest instincts. Where most people pee a little and do stupid things like try and smuggle a dangerous organism through ICC quarantine. 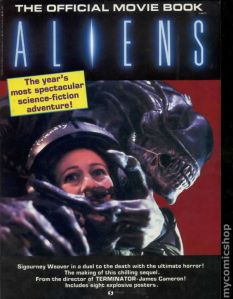 I remember when I was a kid, I was afraid a lot. The whole jumping at shadows in my room at night routine, pulling the covers up over my head to hide from the monsters I was absolutely sure were hanging out in my closet or under my bed. When I got older I found that I’d spent so much time afraid, that I learned to like it. I sought it out. As young as 9 years old, in 1986 (yep, I’m an ancient historical fossil), when I picked up a magazine on a shelf at the store. I’d never seen anything like what I saw on the cover of that glossy book. You remember back when they used to do “behind the scenes” of movies in magazine form? I do! This one was for the movie Aliens, by James Cameron… And I think I fell in love with the most terrifying thing I’d ever seen. I hadn’t seen the original, I wasn’t even old enough to see either, but I was totally obsessed. I remember pouring over the pages of that “Movie Book” and just getting lost in a world I had no idea existed: adult science fiction. I grew up watching Star Wars, Aliens seemed like the next logical step.

Now picture if you will: a family of five gathered in the living room with the lights turned down on a rainy Saturday afternoon in 1986 to watch a VHS tape… The movie on the agenda for this happy little gathering? Ridley Scott’s sci-fi/horror masterpiece, Alien. There was no commonsensemedia.org back then, no imdb.com to look up what they were getting into, only the begging pleas of a 9 year-old boy. It was epic. When that facehugger dropped from the ceiling halfway through the movie, I spontaneously dropped my Pink Panther stuffed animal on my little sister’s terrified head.

I literally cannot believe they let 3 kids under 10 watch Alien. Ahh the 80s. 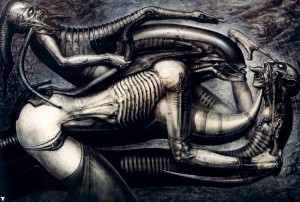 There’s something about H.R. Giger’s design of the Alien in the movies… It’s simultaneously both terrifying and disgusting, yet also strangely beautiful. Giger had a way of turning his strange characters and paintings into erotic images with organic, sometimes phallic designs… They’re almost impossible to turn away from, and I think that’s the part of the attraction of these nasty-looking things… They’re so different, so fascinating, that the brain wants to understand what it’s seeing. When you make a movie with the scariest creature ever made and then use nothing but low lighting, smoke and shadow… Well… You’re daring the audience to look closer on purpose. The Alien franchise, while screeching for new blood, has held up over the years as a testament to what can go right in sci-fi/horror, and what can go wrong when the studio decides it knows best (I’m looking right at you, Alien 3 and Resurrection… Even Joss Whedon’s story couldn’t save that mess).

Over the years we’ve been given differing looks into the Alien universe. From Dark Horse’s comic series to the Aliens vs Predator movies and games, none of it really held a candle to the original (2) movies. However, the Creative Assembly and SEGA Games’ 2014 release Alien: Isolation looks to have broken the decade-or-longer losing streak of failed Alien video games. In fact, Alien: Isolation knocks it out of the park. 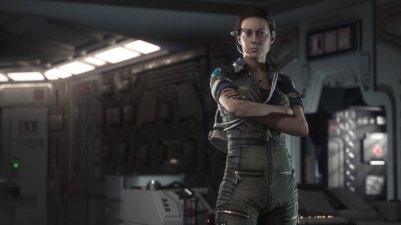 Isolation is a direct sequel to the original Alien from 1979, and honestly, it looks EXACTLY like the movie, to a painstaking detail. From the ship designs to the old green CRT monitors and retro-tech tools, Isolation does the best adaptation I’ve ever seen in a licensed video game. There’s easter eggs and nods to everything from the “Water-Drinking-Bird” perpetual motion toys to the beeping motion trackers… But beware… There aren’t any Pulse Rifles or Loader Exo-Skeletons to give the acid-dripping Alien a stand up fight. This is not Colonial Marines, this is hide and seek, with a deadly monster.

The game picks up the mythology of Sigourney Weaver’s Ellen Ripley, who is at that point in time floating through deep-space after detonating the emergency self-destruct systems on the commercial towing vehicle she worked on. After 15 years, her ship’s “black box” has been found on the edge of known space, and as Amanda Ripley (who has been searching for answers to her mother’s disappearance) your task is to fly out to Sevastopol Station and retrieve the flight recorder.

First of all, let me just say that Alien: Isolation is graphically stunning. I wanted to pause the action every five seconds and just look around at the space station’s massive interiors, ominous passageways, and dark ventilation shafts… But this is one of those games where looking at the scenery will get you impaled by an Alien tail. In a game reminiscent of Dead Space 2, where lone engineer Isaac Clarke must explore an infected space station turning on systems and diverting power in order to escape all the while battling a horde of mutated monsters, Alien does a brilliant job of breaking up the action just enough for you to catch your breath. Usually just long enough to walk through a medical lab or a docking bay and be surprised by a massive snarling creature dropping from the vent duct above you or a blank-faced android looking to smash your head into a wall. 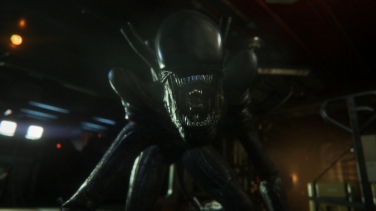 I’ve never played a video game that had me so scared. The main reason, other than the disgusting Alien hunting me the whole time, was there is NO AUTOSAVE feature. Let me stress that point one more time. If you die, you go back to your last save that wasn’t the beginning of a new level. You’ll only learn this lesson once, trust me, but take my word for it. If you hear the chirp of the Save Game Station, don’t think, just do it. Unless the Alien is literally in the room with you, you’ll generally have enough post-load time to get to cover quickly. This left me frazzled, at the end of some levels, miles away from the nearest Save Point, hearing the thump of the Alien hitting the floor behind me, and my heart rate shot through the roof.

After one particular intense night of mid-game play, I even had to pause it to just take a deep breath… That damn thing scared me so much my heart was racing from adrenaline. Now that’s a horror game!

Even the Last of Us, even Dead Space, they only scratched the surface of what the Creative Assembly is able to achieve here. Mainly because Alien: Isolation is not a weapons-heavy blast-a-baddy Bioshock, but a sneak-around-or-get-an-embryo-in-your-chest kind of game. One of the ways they’re able to do this is through the behavior of the AI. Most stealth games, horror or not, follow the time-honored tradition of Bad Guys on Tracks. All you have to do is post up, watch the route the AI takes through the level, and adapt your play in order to sneak from one end to the other. In Isolation, the Alien is programmed to think. 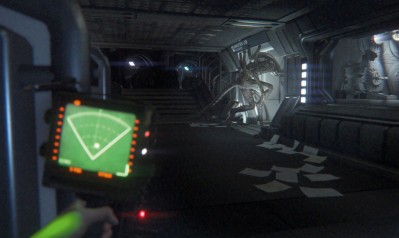 The level will start like this: you’ll enter a space where you need to find something to switch on or off and then get back to the elevator. It sounds so simple, and if there were no bad guys in the game you’d be able to just sprint down the corridors and get it done. However, because this is Alien: Isolation, about halfway into the first corridor, your little motion tracker will beep, and your heart will skip a beat every time. Soon you’ll hear it moving around in the vents, behind the walls, all around you. You can keep dibs on it with the tracker, but the Alien has heightened senses, so use it when it’s too close and it will find you instead. Remember what I said about how you could just sprint from one end to the other? Yeah well, you don’t ever want to sprint. Ever.

By heightened senses I mean if the Alien is standing outside the locker you’re currently hiding in, don’t pull up your tracker… The locker will be shredded with you in it. Luckily Sevastapol is teeming with lockers, tables, even tiny little cabinets for Ripley to squeeze into when the familiar rumbling of the vents becomes the terrifying thump of the Alien’s footsteps- which means it’s on the floor, and at its most dangerous.

It’s a surprisingly simple plot, coupled with all the corporate intrigue and greedy side-plots that make the Alien universe what it is. Sevastopol is damaged when you arrive, triggering a slow descent into the nearby planet’s atmosphere. As Ripley you have to crawl from cover to cover, up one side of the enormous station and down the other in order to try and A) capture/kill the Alien B) Find out what happened to your mother and C) Escape. All the while the evidence of what has transpired over the last weeks or so since the Nostromo’s flight recorder was discovered. There are bodies everywhere, some disemboweled with a detail that leaves you a little disturbed… And where there aren’t bodies there are survivors, some friendly some not.

If fear of the unknown is the big-mamma-jamma of our deepest fears, then Alien capitalizes on it at every corner. It’s a pressing feeling of dread. One that filled my entire body with chills and had me literally on the edge of my seat for almost the entire play-through. From sudden explosions that turn your simple level objectives on their head to the startling appearance of the Alien from a nearby vent, Isolation is full of scares, thrills, and just plain exhausting terror. At the beginning of the campaign I found myself only able to play for about an hour at a time before the constant adrenaline would just wear me out. 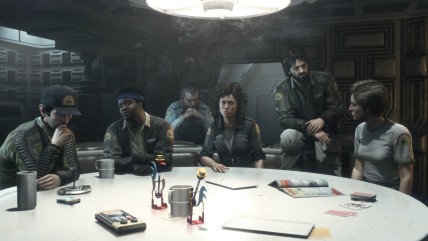 In fact, now that I think about it, Alien: Isolation is just a delivery system for adrenaline. It is, at least, on the harder settings where the AI’s distance-to-detection is significantly pushed out (meaning that on Easy the Alien doesn’t see you standing across the room, but on Hard it can spot you across huge distances if you’re not behind cover). Like lighting up a cigarette and getting your nicotine, or drinking a shot to get your alcohol, a poor soul plays Alien: Isolation to be pumped full of adrenaline, jumping at shadows, and hearing the echoing sound of “something in the vents” long after the power light has faded on their console of choice.

I picked it up for 75% off during the Playstation Holiday Sale bonanza, and after playing it I would have gladly paid full price for this masterpiece of set-piece wizardry and AI physics. Warning however, do not play this game on any lower setting the first time through, it WILL ruin the game. If the AI is turned down you can pretty much walk around the station without really getting into too much trouble… And I can see why most people would think that this is why the game is too quick and too easy.

I promise you that if you put the AI on medium or above this will be one of the most frightening games you’ve ever played, whether you’re an Alien fan or not. Bravo Creative Assembly, you made one of the best games of the new generation… Hands-down. I can’t wait to play a sequel. 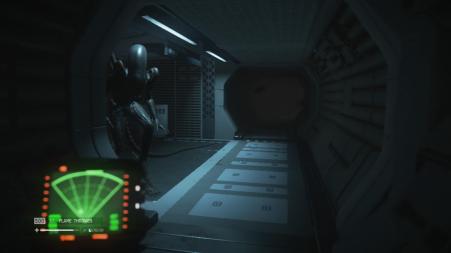 Alien: Isolation is available for XBox360, Xbox1, PS3, PS4, and PC. It currently holds Game of the Year from multiple publications including PC Gamer and Kokatu.