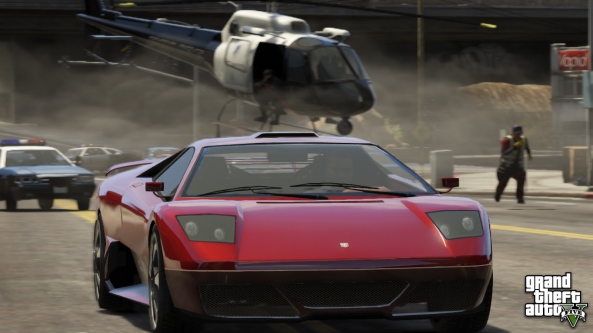 The Internet is alive with anticipation and the buzz is almost unbearably loud. Its a fan-boy’s wet dream, and its only going to get worse as we draw ever closer to September 17th. The imminent release of Rockstar Games’ Grand Theft Auto V is shaping up to be the ultimate swansong for this generations Sandbox… and more.

They’ve pushed the envelope of both graphics, storytelling, and the open-world concept.

Rockstar is one of the most, if not the most respected and revered publisher in today’s gaming world. Ten years ago they single-handedly redefined 3D game-play with Grand Theft Auto III, then promptly followed it up with the motorcycles, helicopters, and planes of Vice City. At the end of the Ps2’s life cycle, Rockstar released GTA: San Andreas, which featured a map that covered all of Southern California and Nevada from Los Santos (LA) to San Fiero (SF) to Las Venturas (Las Vegas). It was the pinnacle of the Playstation 2, and a game that millions devoted countless hours to the over-the-top gang warfare, character customization,

bicycles and jet fighters and parachutes that San Andreas brought.

Not to be out-done, Rockstar revolutionized the current generation as well with the brilliant and realistic Grand Theft Auto IV. Set in the same fictional Liberty City (NY) from GTA III, this time around the sandbox became highly detailed and realistic, shying away from the silly antics of the San Andreas days. GTA IV brought gritty, thought-provoking satire and offered the most realistic simulation of a city ever built inside a computer. Rockstar immediately followed that up with the expansive and ever-fun Red Dead Redemption, which brought the open world sandbox style of GTA to the old west… With what most consider to be the best western ever made.

From all accounts they aren’t letting up. Grand Theft Auto V, which takes us back to a re-imagined San Andreas, comes out September 17, and its already being hailed as the next step in sandbox evolution. With Rockstar’s largest, most detailed map yet, this Oceans 11-type heist-fest is set to steal countless hours from you over the next few months.

Over the past few days I’ve poured over interviews, read reactions, and soaked up everything I can learn about what is is going to be a total sea change in multiplayer gaming. Let me phrase that a little differently:

Grand Theft Auto Online is about to blow every other online gaming experience out of the water. 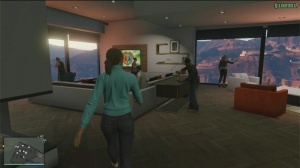 In an interview with Rockstar’s Leslie Benzies, it was recently revealed that the game engine behind GTA V and GTA Online is fully expandable, meaning there is not limit to the size of the world that GTA Online can inhabit. He was quoted as saying that it was their ultimate goal to simulate The World.

So what started as a game engine to build the world of Grand Theft Auto V with quickly became the jumping off point for what is now looking to be one of the greatest achievements in online gaming history. So much so, that Rockstar has even pushed out the release date of GTA Online to Nov. 1st so that gamers can become accustomed to the single player world and the changes in game play. 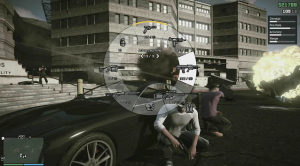 I’m blown away by the technical achievement here alone. For the head of Rockstar to say they can theoretically simulate the Earth, with cities and countries, people and all… The implications of that are just enormous. Benzies said that they wouldn’t stop until they’d simulated life.

For anyone that’s played Grand Theft Auto IV, that’s not too far a leap. If you’ve spent time in the living, breathing, bustling Liberty City, then you know how just standing on a street corner can prompt some of the game’s funniest mechanics. I once stood outside a cafe, letting the camera drift out over the street as I lay the controller down. Eventually there was a “crash” as an auto accident happened on the street in front of me, both drivers get out and start yelling at each other… Then one punches the other guy and hops back into his car and speeds off! This is exactly why GTA IV (and now V) are the most immersive experiences you can plug into. I mean come on, you can sit in your apartment and watch clever, satirical television programs made by the geniuses at Rockstar. The levels of GTA V are even deeper, and Grand Theft Auto Online brings it all live.

You can form crews, perform co-op heists, buy stocks, property, cars, insurance (in case some asshole steals your ride), the amount of detail put into this world is mind-boggling. There are the regular Deathmatch modes, other co-op missions, races on land, air, and sea, military jet dogfights above the city, air-support for elaborate heists that you and your friends (or strangers for that matter) can pull off for more cash. There are ATV races, jet ski races, launching-off-mountains-on-motorcycles-then-opening-your-parachute races, there is tennis, sports, gambling… Rockstar went ALL OUT this time… There are nearly 500 different missions that mix and match each time to create the most fun you can have online with both hands on the controller. 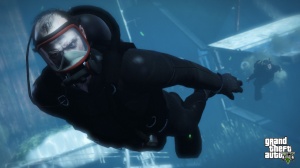 Now there aren’t any specific plans to release GTAV or GTA Online for next-gen consoles as of yet, but with Microsoft and Sony both set to release their next generation consoles this fall, it’s only logical that they will. Rockstar has built this all-inclusive simulated world, and they intend to keep it, expand it, and let it evolve as the years go by… So it’s no stretch that they wouldn’t force people to play on their Ps3’s and Xbox 360s five years from now. That means it’s perfectly safe to get the game if you’re planning on upgrading to a next-gen console this holiday. Just don’t throw out your old one yet, cause if you’re like me, a guy who still plays GTA IV to this day, you’ll be playing GTA V and GTA Online right up until it’s released on next-gen consoles.

When GTA Online releases, it will be seamless. There’s a wheel on the game’s heads-up-display that allows you to switch back and forth between the single player’s three main characters… And on Nov. 1st a fourth character will simply appear. You’ll be able to click on it and as the camera pulls back, up into the sky and then back down again on another portion of the map, it will drop you right into multiplayer mode. It’s all controlled from the in-game iPhone knock-off, and then loads during the character-switching animation. That means no lame party lists, no waiting in lobbies for other players to join, no countdowns while you furiously try and select your loadout, none of the old-school multiplayer annoyances. 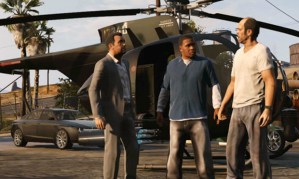 Rockstar has made the transitions in GTA V and Online as immaculate as possible.

You’ll first appear at the airport, a fresh face to San Andreas, and be guided by some of the single player’s characters through the first couple of missions, to give you a feel for the set up. In Online, just like the campaign, the game is all about money. There’s a real, fully functioning economy in San Andreas, where you can purchase stock, real estate, and different houses, condos, cars, and more. You can customize every aspect of your character from clothes and tattoos, as well as your vehicles- paint jobs, rims, convertibles!!

Each multiplayer mission nets you more cash, which you’ll need to remember to drop off at the bank, cause if you get capped out on the street by another person, they can steal it! That means once you get going, you’ll have to go to ATMs and such to keep your daily expenses paid (weapons, cars, etc) without carrying enough to make yourself a target for other players.

From planning elaborate heists that require multiple people, to simply robbing a liquor store while your buddy waits in the car,

Rockstar has made the criminal underworld simulation as detailed and as realistic as it can be. They’ve also re-done the combat mechanics of GTA, no more run and gun and try to not get shot. They’ve simply taken the cover and combat system from last year’s masterpiece Max Payne 3 and transplanted it into GTA. That means no more clunky gunfights… We get a true cover system, aiming, and even slow-motion bullet time for some instances! They’ve kept the driving mechanics from GTA IV (where the cars feel real because they have weight), and refined them. Better camera angles, more responsive steering and brakes, and the best of all? Slow-motion bullet-time driving in some cases as well!

All in all, it would appear Rockstar listened to the fans. Gone are the days of drive here and kills him missions, now everything ties into the heists, their planning, execution, and fallout. They took the great start they had in GTA IV and expanded it, making every single aspect of game play as good as it could possibly be… And I can’t explain in one post the extent to which they have gone to simulate a detailed and changing world in GTA Online. Even long after the single player campaign has been finished, people will be logging into GTA Online for years to come. If everything I’ve seen works are well as they say it will, one day you might log into GTA Online and start the game in your actual hometown, then travel out into the countryside to wreak havoc and mayhem from there.

This world is gigantic, it’s layered incredibly from the clouds to the bottom of the ocean, and it’s designed to expand well beyond the borders of Los Santos. This is the future of the sand box, and Rockstar has done it again.