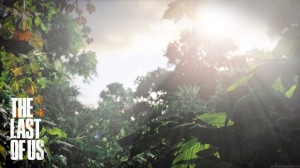 Let’s talk about magic. Not the Harry Potter, wave your wand kind of magic, but the real kind. The kind you feel on a first date, or a beach, or any time when events, emotions, thoughts, everything just seems to flow in harmony. When your ears are ringing from the comprehension that something truly special is happening… It doesn’t happen as often as it should in life. Especially in the realm of entertainment. Entertainment is another beast altogether. It’s manufactured magic… And most of the time you can tell the glaring difference between the two.

Movies, and lately TV, have always been the perfect medium for manufactured magic- just as any other art stirs emotion, thoughts, questions, etc… But at the same time, for every Godfather, Unforgiven, or Indiana Jones, there are 200,000 direct-to-video Steven Segal movies hoping to cash in. That’s the thing about entertainment. In it’s most refined form, it’s strictly for profit. 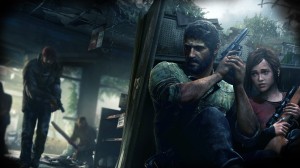 It’s not coincidence that movies make billions of dollars these days, they’re designed to. However, luckily for us, even manufactured magic is magic. Let’s face it, there are great movies, and then there are Apocalypse Now’s… Just as there are great shows and then are Mad Men‘s.

Well, the 8th dimension has just been blown open. Now we have great video games, and then we have The Last of Us.

I’ve never played anything like it. Technically it’s a video game, in that it comes on a game disc and you play it on a console… But when the opening scene of this unfathomably fantastic adventure begins… It’s all magic from then on. 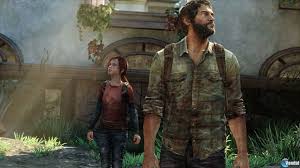 The Last of Us is the story of two people, Joel and Ellie, and how they survive 20 years after the world as we know it ends. Do you remember that scary picture of the tarantula that had been over-grown by the Cordyceps fungus? I do. It looks like some kind of monster from under the sea. As the spores from the fungus replaced the spider’s cells with its own, it changed it into the freakish alien-looking horror it became… While the spider was still alive. Ultimately, the spider dies and the spores are released into the air to find the next host. Scary right? Well imagine it happens to people. The spores have mutated, speeding up the process, turning regular people into mushroom-headed nightmares that attack and kill anything they see or hear.

It’s a twist on the old zombie apocalypse, one that’s rooted in real, disgustingly terrifying science. 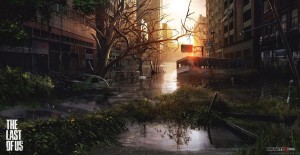 The Last of Us starts off on the night of the outbreak, with animation done so well it looks Pixar-real. Animation in a game is key, and the motion-capture technology used to bring these characters to life is as good as it gets. The movements are real, the faces, eyes, and the mouths all move perfectly to suspend the disbelief. The characters have weight, they don’t spring like normal video game avatars. They move deliberately, it’s one of the dozens of tiny details that work together seamlessly.

After the heart-wrenching opener we cut to Joel in Boston, 20 years later. He’s older, greyer, and hard as f*cking steel. The story picks up when Joel and his girlfriend Tess, a pair of morally-ambiguous smugglers, people who ferry goods and services in and out of the Quarantine Zone, get roughed up by a local henchman. Boston is one of the few remaining Zones that are still functioning, although the more time you spend in the Zone, the more it feels like these people are just dying a little slower than the infected that roam the dark corners of the world. 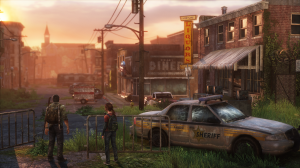 The story doesn’t fall back on exposition, it drops you in the middle. It doesn’t stop to explain everything that isn’t vital to the main story, and therefore doesn’t insult the intelligence of the player.

In fact, this “game” is all about not insulting the intelligence of the player. It takes every zombie-horror-survival cliche and turns it sideways. There is never a moment in the entire 17 hours of play that feels stale or tossed in… And did I mention no load times? Usually in games you’re waiting for a little bar to fill up in order to play the next mission or level… Here, it’s all one seamless experience. There’s no breaking the fourth wall to pull us out of the world we’re submerged in.

Seriously, there were times I referred to things in the game in the first person. Like, “well she’s been traveling with me for this long,” that never happens for me. I play a lot of video games and not once have I felt personally responsible for the outcome of the story. Why not? Because I’ve never been invested like I have in The Last of Us. I’m telling you, this is not a video game. It’s a simulation. 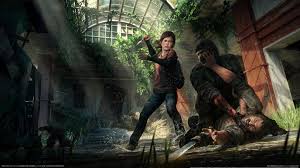 There are moments of pure shit-your-pants terror, where the controller is slipping from your hand because your palms are sweating from adrenaline. All because Naughty Dog, the makers of the uber-popular Uncharted series, plays it straight and lean. There’s no over-the-top, tongue-in-cheek here… There is brutal, unforgiving, and yet ultimately beautiful “game” play. From the scariest depths of spore-ridden basements to the stunning views of an over-grown world where nature has taken back what man had built, this is a phenomenal experience.

I won’t spoil a thing that you don’t already know. Joel and Tess meet up with Ellie, a young teenager, and they are paid to smuggle her out of the Quarantine Zone to the local militia/freedom-seeking Fireflies outside… But of course, things go wrong along the way, and it’s up to you to guide these characters across a ravaged landscape chocked full of scary fast zombies and even scarier fast people. Early on one character muses, it’s not the infected you have to worry about, it’s the people that are unpredictable. 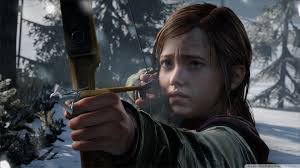 The Last of Us is a triumph in every way. It succeeds in flushing out a world only glimpsed in films like The Road, Children of Men, or I Am Legend, in which the environment itself becomes a central character. It take you out of your living room and into a world so dangerous, so unforgiving, that the only choice is to be even more brutal. Eventually you come to truly care about the characters on the screen. When they’re hurt, you feel it… You really do. More than once I found myself tearing up, feeling grief, feeling betrayal, feeling the cathartic struggle for life. I cannot recommend this “game” enough. It’s the reason why the PS3 was made, and a fitting swansong for one of the best entertainment consoles ever made.

Bravo Naughty Dog. This is truly a work of art.