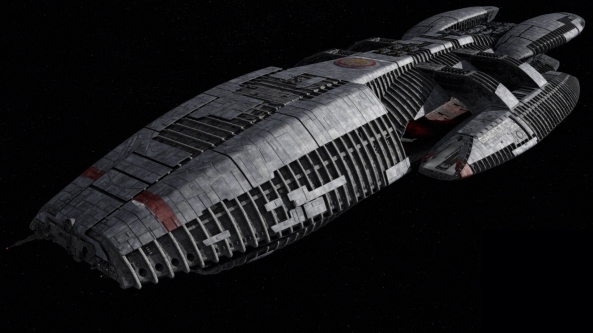 The “Battlestar-Class” Carrier/Destroyers were constructed before the first Cylon war, one of 12 built in honor of the 12 Colonies. When the war broke out, the giant ships were put into mass production due to their extreme effectiveness engaging the enemy. The flagship, Galactica, is the only surviving “Galactica-Class” battlestar 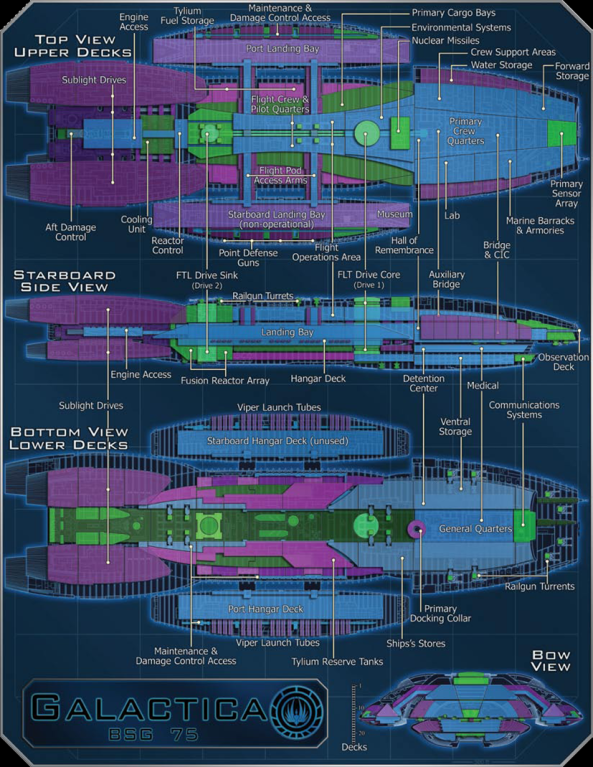 , and one of the only military ships left after the destruction of the 12 Colonies by the Cylons due to the fact that it was never retro-fitted with any kind of computer network or Dr. Baltar’s integrated defense system software. In fact, she was in the process of being decommissioned in the series opener, one of her flight pods already converted to a museum. Galactica is now the leader and sole protection of the survivors of humanity in their quest for Earth. 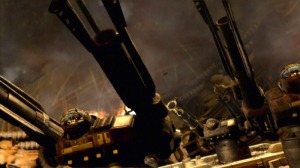 Coming in at just about 4720′ long, the Galactica’s defenses include 514 anti-aircraft guns, 24 main artillery batteries, and 14 missile tubes for conventional and nuclear weapons… capable of throwing an unprecedented number of shells, flak, missiles, and nukes at any engaged enemy. She also houses 4 squadrons of 20 Viper attack fighters, and dozens of Raptor multi-role craft. All in all, Galactica is a 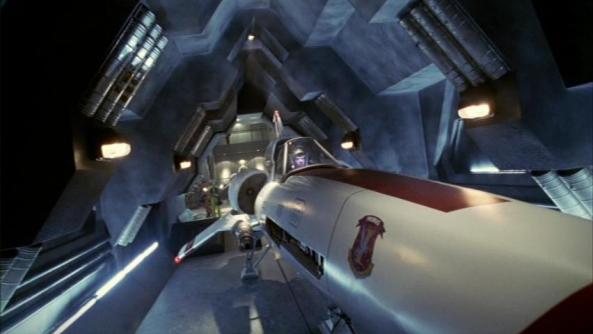 formidable opponent in space battle, highly maneuverable, and capable of staying at “sea” for months without refueling or rearming (a good thing, due to the circumstances surrounding its current status as fleet protectorate).

Galactica’s crew consists of around 2,600 men and women, not including the civilians that eventually take refuge in her quarters and one of her flight pods. From senior staff to deckhands and Colonial Marines, the crew of Galactica is an inexperienced and untrained group due to its upcoming decommissioning ceremony. 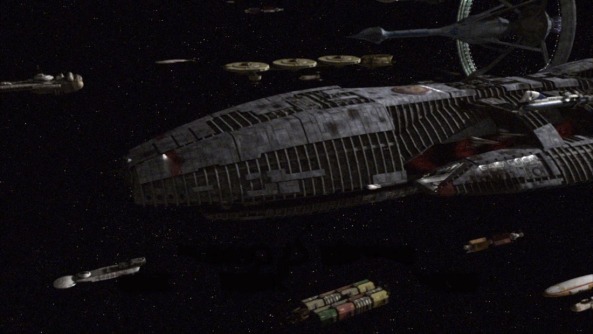 Skippered by Commander William Adama, the Galactica’s crew is responsible for the protection of the survivors of humanity 24 hours a day, 7 days a week. Pilots who run Viper patrols and Raptor scouting missions, deckhands responsible for maintaining those ships, weapons manufacturing to supply those ships, cooks and galley staff, 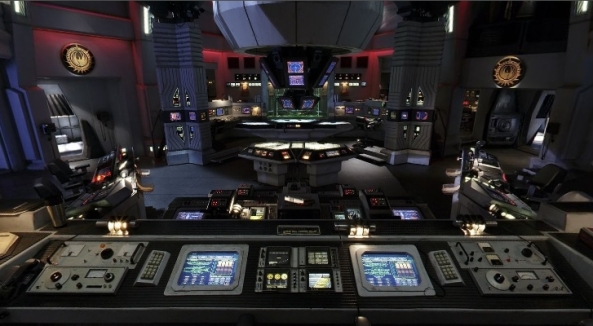 Combat Information Center (CIC) staff such as communications, navigation, and tactical officers, and the marines that keep the peace… all making up a crew who runs on a clock that doesn’t stop. The safety of the fleet being under constant threat from Cylon attack, Adama and his crew have the most thankless job in the universe. In charge of the 70+ ships of the civilian fleet, Galactica has been humanity’s first and last line of defense until the arrival of the Battlestar Pegasus during the second season… 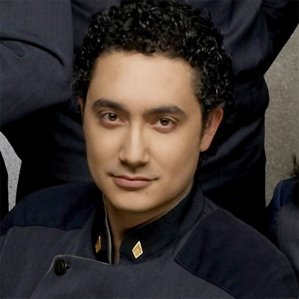 Lieutenant Felix Gaeta, the tactical officer of Galactica. Felix Gaeta is a brilliant officer who handles everything from helping Dr. (and later, President) Baltar with his Cylon Detector, to engineering the use of Galactica’s computers together (despite the disastrous consequences). Lt. Gaeta is eventually manipulated by numerous people to further their own interests in the fleet, including staging a mutiny onboard the Galactica, for which he is executed by firing squad. 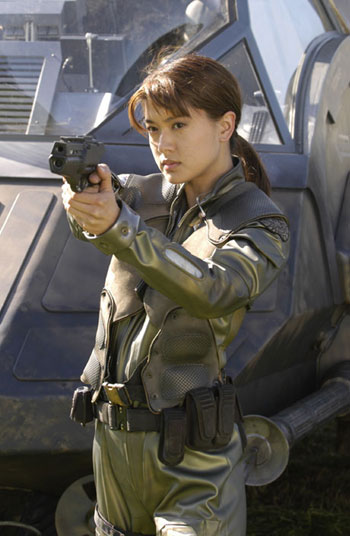 Lt. Sharon “Boomer” Valerii, a skilled Raptor pilot and lover to Chief Tyrol, Sharon soon realizes she is a Cylon sleeper agent who has been given fake memories in order to infiltrate humanity. The Old Man sends Sharon on a highly important mission to destroy a Cylon Basestar in orbit around Kobol, she flies into the heart of the huge ship thanks to a Cylon device rigged by Lt Gaeta in order to drop a nuke. Inside she is greeted by dozens of other 8’s, she panics and dumps the bomb and leaves, destroying the Basestar. 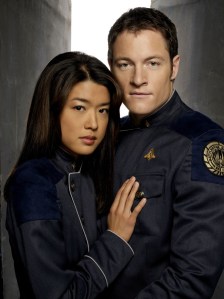 Lieutenant Karl “Helo” Agathon, marooned on Caprica after the attack, fell in love and impregnated a Cylon 8. (copy of Sharon “Boomer” Valerii. 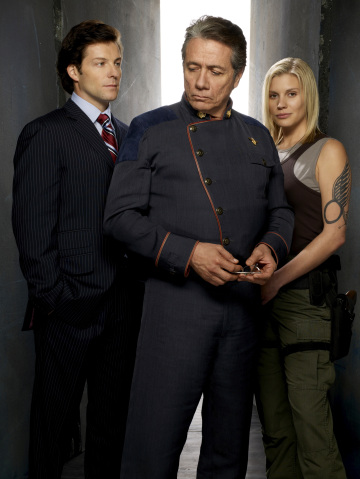 Captain Lee “Apollo” Adama is the son of “The Old Man,” an excellent Viper pilot, and eventually promoted to Commander of the Pegasus.

Captain Kara “Starbuck” Thrace, the best pilot in the fleet, and adopted-daughter to Bill Adama (due to being involved with Apollo’s brother, The Old Man’s other son, Zach years before the events of the show). Starbuck is promoted from a brawling Lieutenant to Captain, and given command of Pegasus‘ and Galactica‘s Viper squadrons. Early in the show, while interrogating a Cylon spy, Kara was told she was the “Harbinger of Death,” and that her fate was to lead humanity to it’s end.

Major “Doc” Cottle is Galactica, and really the fleet’s, best doctor. He oversees everything from Roslin’s cancer to The Old Man’s attempted assassination to the birth of Helo and #8’s half-human-half-Cylon hybrid-child.

Chief Petty Officer Galen “Chief”  Tyrol has been serving under The Old Man for 5 years, on both the Valkyrie and the Galactica. He is the highest ranking non-commissioned officer on Galactica, and was initially involved with Sharon “Boomer” Valerii (before she realizes she’s a Cylon and busts a cap in Adama’s gut, 2 of them actually) for a long time. 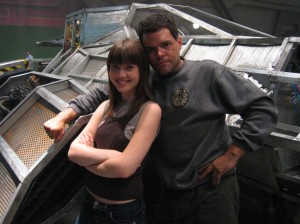 Due to the fact that Sharon is a Lt, and Chief’s CO, they are forced to discontinue their relationship.  Chief later starts to have nightmares about killing himself, and punches the living daylights out of Cally when she tries to wake him (they, of course, hook up and have a son, Nicholas).

Petty Officer 2nd Class Callandra “Cally”  Henderson is one of Galactica’s deckhands, responsible for maintaining Galactica’s Viper and Raptor squadrons. She is mostly a background character until she attempts to wake up Chief, gets severely beat, and promptly falls in love with him.