Colonel Saul Tigh is a tall, lanky man in his mid-60s. Married to Ellen Tigh, he has been Commander William Adama‘s right hand man for over a decade. Before serving on the Galactica, he was also the XO (exec officer) of the Valkyrie, under Adama as well. Earlier in his career, during the first cylon war, Tigh served as a gunner aboard a few different Colonial fleet ships. 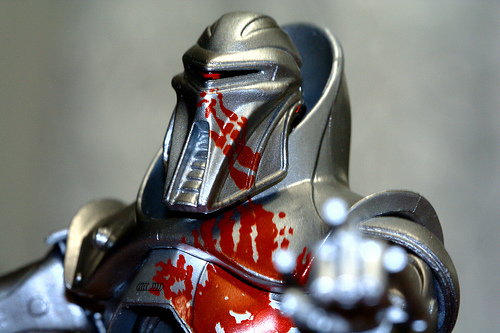 He bore witness to the brutality of Cylon Centurion (the old, clunky robots) warfare, including their tendency toward massive tissue damage, literally plowing their way through human resistance with spinning blade hands… vivisecting as they went. In both instances he lived, only to be severely scarred from the bloody tactics of the cylons. As a result, Col Tigh struggles with alcoholism for many years.

Saul Tigh later scraped by aboard a simple commercial freighter, showing signs of post-traumatic stress disorder every time he smelled grease or machine oil. He would almost vomit because it was the same as the “stink” of Centurions. He drowned his troubles in alcohol for years,

struggling with his own inner demons. Roughly 20 years after the war he bumped into William Adama, who had not seen as much combat experience as Tigh himself, and they quickly became friends. Tigh and Adama remained in touch after William was recommissioned into the service, and two years later, Tigh was reinstated as a captain.

Col Tigh was standing next to Adama the minute the cylons hit the Colonies, and he’s been there ever since. When Adama was shot and almost killed, he took over the Galactica, reluctantly, and with near–disastrous consequences. Like everyone else, his estranged wife was assumed

dead in the cylon attack… however when Ellen Tigh suddenly shows up with amnesia, saying

she’d been on a freighter in the weeks since the attack (not knowing who she was), and when suspicion leads to her being tested by Dr. Baltar’s “cylon detector,” she comes back in the clear. Rejoicing, Ellen and Saul reunite the Tigh way… with lots and lots of booze (not to mention belligerence, violence, and all around sluttery). [MAJOR SPOILERS FOLLOW]

“Which side are we on? We’re on the side of the demons, chief. We’re evil men in the gardens of paradise, sent by the forces of death to spread devastation and destruction wherever we go.”

Saul, Chief Tyrol, Sam Anders, and Tory Foster all begin hearing singing coming from Galactica’s walls after the escape from New Caprica… coming to them from across the universe, and across the millennium… “There must be some kind of way out of here, said the joker to the thief…” The four wander the halls and follow the music until they find each other, standing quietly in a storage locker, the damning revelation of their being the final four cylons. Unbeknownst to them, they are part the original five humanoid cylons… the only survivors of the lost 13th tribe of Kobol– who had found Earth, only to have it destroyed by their own version of cylons thousands of years later.

The 13th tribe of man had actually been a race of humanoid cylons, created thousands of years before the exodus from Kobol by the humans and “gods” of their pre-history. So when all fled Kobol, they fled to Earth, away from their creators. They eventually fell victim to their own cylon creations, in a great war that ended their Earth… but not before leading scientist Chief Tyrol and Saul’s wife Ellen, created the ability to “respawn.” Through a practice of digital extraction, the final five cylons were beamed to a ship in orbit when their apocalypse happened. They set off across the stars at near the speed of light, in search of their human creators, hoping to warn them of the possibility of a similar catastrophic experience with cybernetic creations and artificial intelligence. They were too late. When they arrived 2000 years later, the first cylon war was already raging out of control. They decided to contact the cylons, in hopes of convincing them to stop the carnage. They did, by promising them to show them how to make humanoid copies of themselves. Through the digital extraction process, Colonial Cylons were soon able to make 8 different types of completely human-looking models. John, the original (based after Ellen Tigh’s father, John), turned on the “original final five” who had shown them how to finally defeat the humans. John then wiped the memories of both the Tighs, Tyrol, Anders, and Foster, and banished them to live as humans… to see how violent, sick, and twisted humanity had become.

“There’s just too much confusion, I can’t get no relief…”

…And so was born Saul Tigh, third generation Colonial military man, published cylon war historian, and excellent fighter pilot. Never the wiser to his real beginnings, thousands of years away, and a hundred lifetimes ago, on the lost planet of Earth. Best friend to Bill Adama, executive officer of the Battlestar Galactic, and ferocious military leader. 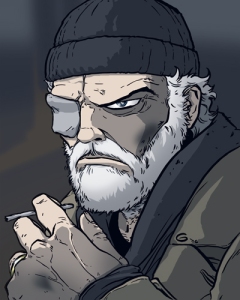 From the decks of the Galactica to the cylon prisons on New Caprica, Saul Tigh (also leader of the human resistance, but that’s another post), has fought, worked, sweat, and bled beside humans for as long as he can remember… and yet he has always known there is something different about him. He’s covered it up with alcohol, unable to face the underlying emotional core the new memories had been laid over.

This is where we leave him now, confused, lost in his strange memories… on the run from the cylons… in the coldness of space.

Coming Up on the BSG Files:
Galactica