The term, “broke the mold” comes to mind when I think of Rockstar Games. No one does it like this anymore. Video game companies pump out title after title, sequel after sequel, year after year… Call of Duty has a new arcade shooter every November, as does Assassin’s Creed and countless other franchises. But not Grand Theft Auto.

You see, Rockstar has this crazy idea that if they spend years building and perfecting the best game they can possibly make, that the quality of said title alone will be enough to get them in the black. They spend six years and hundreds of millions of dollars making GTA V, and much to their investors’ delight, they were absolutely right.

Grand Theft Auto V was the greatest game of the last generation, and it’s about to make its Next-Gen console debut on Tuesday, the 18th of November. I imagine that right about now everyone at Rockstar Games has got to be feeling pretty good about themselves. Last September GTA V broke nearly every video game record there was when it launched on PS3 and XBox360, selling over $800 million in its first day of release and breaking the $1 billion mark just a few hours later. As of now, it sits just below Mario Kart and Minecraft as the most popular game of all time… And that was just on the two 10 year-old consoles.

Tuesday, when the long-awaited ball drops, and GTA V hits the streets for Next-Gen, the records will start falling just as quick. I’ll tell you right now that it’s going to be the biggest launch of a Next-Gen title yet. Never mind that a 4K-resolution PC version of the game will drop in January.

You might ask why I think that so many people will run out to buy a game that’s been out for over a year… And I’ll ask you a simple question in return: Have you played it?

If you’ve played GTA V (and you’re not one of the immature minority that lives to hate for hate’s sake) then you know why every single person that owns a PS4 or an XBox1, and is old enough, will absolutely buy this game. We’ve seen a few re-masters of last-gen games now, the highlight being Naughty Dog’s The Last of Us, which I played through way too quickly over the summer, despite trying to take it slow and savor the sublime gaming experience that it is… But GTA V is something else entirely.

First of all, Rockstar basically rewrote the game from the ground up in order to bring us a fresh take on a familiar story: First Person Mode.

This isn’t just a gimmick where they put the camera on the 3rd person character’s shoulders, no, they scripted thousands of new animations for hands, guns, weapons, cars, planes, everything. Let me stress that: EVERYTHING. So on top of the 1080p 30fps graphics with Next-Gen textures and shadows, this new First Person Mode drops you, literally, right into the action in San Andreas. With a menu full of customizing options, we will be able to play through the entire Single Player Mode and GTA Online as a 1st Person shooter… Complete with designated grenade button and both 1st person and 3rd person cover mechanics. In fact, you can tell the game which order you want to play in. You can set it to 1st person when on foot, 3rd person when driving, and then back to 1st person for all of the rag-doll effects… Because there’s nothing as disorienting as being hit by a car in the 1st person. One second you see sidewalk, the next you’re spinning wildly through the air.

First Person Mode is a revolutionary step for Rockstar and for Grand Theft Auto, which has always been traditionally a Third Person Game. The design team has thrown down the gauntlet and directly challenged its only competitors, 1st Person games like Call of Duty, Battlefield, and Far Cry.

I’ve said since launch that GTA V is the be-all end-all for video games, simply because it has everything you could ever want to do with a video game all in one package. Now that First Person is coming to GTA, fans of other shooters will be able to set up their own First Person Only matches using the Content Creator. I can’t wait to see homage levels springing up in GTA Online… Since the creator allows you to basically wall off any portion of the huge map and turn it into your personal racing/shooting/flying playground, I expect to see themed jobs springing up constantly. it would be fairly simple to set up the same exact Battlefield: Hardline demo level in downtown Los Santos.

With First Person Mode, the games damage effects are over-hauled to a ridiculous  and disturbing, degree as well. For example, running up to a pedestrian on the street and socking them in the face produces actual feelings of guilt as the new 1st person mode and crisp graphics shows their reaction, pain, shock… The new hatchet weapon is particularly trauma-inducing when it gets lodged in the flesh of your victim and you see your character’s foot come up and brace the body while you yank it free. The expression on peoples’ faces, the blood effects, and the 1st person mode all make for a VERY hardcore GTA experience.

Along with the new First Person Mode comes a newly-designed and fully-functional interior for every vehicle in the game. From the working speedometer and tachometer in your favorite super car to the altimeter and artificial horizon dials in aircraft… Rockstar pulled out all the stops with this one. If you’re like me, and drive most of the time in “hood-cam” mode, you’ll love 1st Person driving. For those that are still weaving in and out of traffic in 3rd person, I expect many a T-bone collisions with traffic that’s just out of sight. 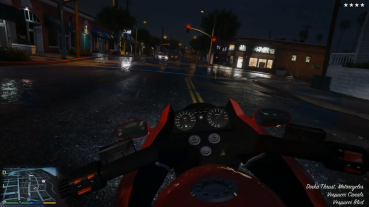 Rockstar has also announced, nonchalantly, that Online Heists will be coming in the first title update to hit the Next-Gen version. If you don’t know already, this is a REALLY big deal to fans. Rockstar originally intended for Heists (which are the best missions in the story mode) to be included with Online when it launched, however the unexpected popularity and a bunch of early hackers breaking the game caused multiple delays, and the release kept getting pushed out… Much to the chagrin of Twitter and Youtube commenters. Alas, a year and many delays later, it’s finally (almost) here. If nothing, I won’t have to listen to fanboys cry about how Rockstar personally let them down anymore.

This is the same GTA V you know and love, new and improved. The animal count has been raised to include many different dogs, cats, supposedly bunnies, and tons of others. Traffic, which is strangely scarce for a city modeled after Los Angeles, has been raised as well. Because there’s nothing like hitting an armored car, jumping on the freeway to get away, and running smack-dab into a bumper-to-bumper traffic jam. I mean, come on, this is L.A. right? Plus, all of the new DLC cars that have been released over the last year will be blended in with regular traffic… Which hopefully means no more, “I’m driving around the city and the same car is everywhere.”

There’s bark on the trees, needles on the cacti, leaves on the bushes, and dust on the wind. There are dolphins, killer whales, hammerhead sharks, and more swimming in the HUGE underwater portions of the map. There’s a new hatchet weapon as well as a new Railgun that causes thins to explode instantly if you can hit your target. There’s also a hundred-odd hours of music and original radio station chatter included… Which is alone one of the best ways to make GTA seem fresh: Change the damn music. Nothing gets more repetitive than the same songs over and over.

Rockstar has added a whole new level of detail to an already breathtaking game. When you’re driving on the back roads of San Andreas, and the sun dips below the horizon, lens flare shoots across the screen while lightning flashes in the distance, and soon only the car’s headlights are visible as rain pelts off the hood and fills puddles on the ground… For fans like me, this is a no-brainer. Grand Theft Auto V was the first game of a new generation, despite being constrained by the limitations of the last-gen consoles… Now, a year later, it’s finally here.

The last year has been warm-up. Spring training. I’ve spent hundreds, HUNDREDS, of hours playing GTA V… And now it’s time for the big game… Training wheels off… And many, many other sports analogies. If it isn’t clear, I love Grand Theft Auto. The freedom, the driving, the flying, the heart-skips-a-beat gunfights, everything. It has everything a video game about criminals in a fiction Los Angeles should have… Except for surfing. I’ll never understand why a game as researched and as developed as GTA V left out one of the essential elements of L.A. life: surfing. The ocean looks amazing on PS4, and I still can’t grab a board and hang ten.

But I can toss a brick of C4 on a surfboard and blow it out into the ocean. Or I can push a donut-shaped float out into the surf with the characters’ legs… Choices, choices…